Just recently, a 3DMark 11 benchmark of the upcoming NVIDIA GeForce GTX 780 Titan was leaked. You would be amazed how fast this single graphics card can be. If the results displayed below were true, then this GeForce Titan 780 is a monster and has single handedly surpassed the GeForce GTX 690, a dual GPU graphics card. See more details below. 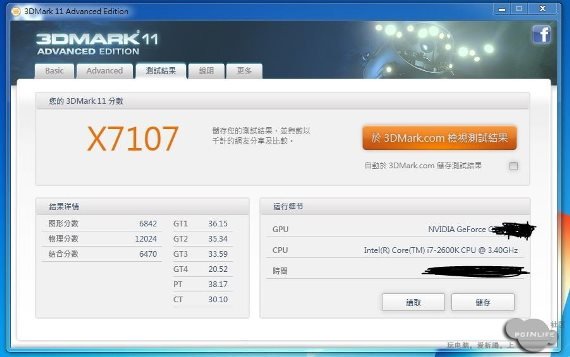 The image above is the rumored 3DMark 11 score of the GeForce GTX 780 Titan. It got a total of score of X7107, paired with an Intel Core i7-2600K Ivy Bridge processor. If the score is real, it has surpassed the score of a GeForce GTX 690, that usually scores only X6000+ points. The Asus ARES II scores somewhere in X6300 while the GeForce GTX 680 is around X3300. This made the GTX 680 like an mid-level video card! Again if the benchmark is real, it would make the popular GTX 660 Ti like an entry level graphics card.

The GeForce Titan 780 is said to be powered by an NVIDIA GK110 chip which is codenamed “Titan”. According to reports the GK110 has 7.1 billion transistors, 15 SMX units, more than 1 TFLOP FP64, 1.5 MB L2 Cache, 384-bit GDDR5 memory interface and is PCI Express Gen3 compatible. Think about it, if this new GK110 will be mainstreamed, a new line of monster graphics cards will be rolled out that surpasses all its predecessors. And what if a GTX 790 will come out, a dual GPU 780?

The upcoming line up is really interesting and would definitely make a new history in the world of graphics card. Let’s just wait and see what is AMD’s answer to the upcoming GeForce GTX 780 Titan graphics card.

UPDATE: According to reports, the GTX 780 will be unveiled or released this coming February 2013. But the reports is not confirmed yet.