Just recently, the upcoming Nvidia Tegra 4 mobile processor, codenamed “Wayne“, was revealed. Partial details and specifications of the said CPU was revealed from a Chinese site called Chiphell. Based on the partial specs revealed, the Nvidia Tegra 4 Wayne is way more powerful than the current Tegra 3 processor, about 6 times! 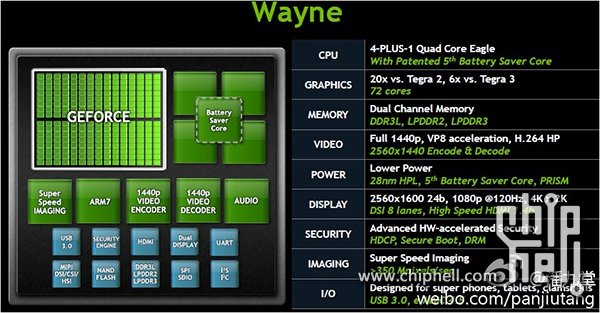 Most probably, full details and information will be revealed in the upcoming CES 2013 or in the Mobile World Conference in February 2013. It’s not sure yet which device (smartphone or tablet) will be powered by Tegra 4 yet. Obviously this upcoming CPU out-performs Samsung Exynos, but we know this doesn’t end here. Samsung might also release a more powerful CPU this coming 2013.