Quad Core and a nice 5-inch display are becoming the standards in flagship smartphones. Not only that they have become a deciding factor as well, they also add value in terms of the performance and overall user satisfaction. Today, let’s compare three Quad Core Android smartphones who are competing for local domination. The recently released O+ 8.15 from O+ USA, Cherry Mobile Skyfire 2.0 and MyPhone A919i Duo. Check out their specs comparison below. 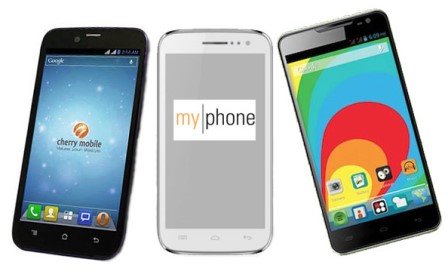 As you can see from the specifications table above, all of them are running on Android Jelly Bean. Only the O+ 8.15 has the 4.2.1 Jelly Bean version out of the box, unlike MyPhone A919i Duo and CM Skyfire 2.0 you still need to update the OS.

Both the O+ 8.15 and MP A919i Duo are powered by the same CPU and GPU paired with 1GB of RAM. Only the Skyfire 2.0 is powered by Snapdragon processor. Although they are clocked at the same speeds of 1.2GHz, we still need to confirm if the Skyfire has the better CPU. Not the mention its GPU is undisclosed.

In terms of internal storage capacity, the O+ 8.15 has twice the internal capacity. And this is an advantage over the two smartphones. 4GB of internal memory is very low in my opinion considering that these are not entry level smartphones. You can easily maxed that out with just a few apps and games. And even though there is an expandable memory of up to 32GB, all apps and games are installed in the internal memory by default. You will need to root your phone and do some serious tweaking is you want to install the apps in the external memory. Not a good option for the many.

All of them have a huge 5-inch display. But the Cherry Mobile Skyfire 2.0 is the weakest link here. It only has a 960×540 pixel resolution and a pixel density of 220 ppi, meaning not so good display quality. The MyPhone A919i Duo and O+ 8.15 have the better display quality.

Even though they all have an 8 megapixel rear facing camera, the O+ included the BSI technology in its phone’s camera. This might be a tad better compared to the two phones. In terms of network capabilities, both the A919i Duo and Skyfire 2.0 have dual SIM feature, while the O+ 8.15 only supports one SIM. Dual SIM might be a plus factor for some, but if you don’t need this feature, the O+8.15 is still the winner.

The rest of the specifications are more or less the same already. But here’s comes the deciding factor. Although the three smartphones have similar specs and features, their prices are different. The cheapest is the CM Skyfire 2.0 that is only Php 7,999. Followed by the MyPhone A919i Duo for Php 9,950. Take note, the display of the A919i Duo is better than the Skyfire 2.0, and probably the CPU/GPU too.

The O+ 8.15 is the more expensive smartphone among the three. It has an SRP of Php 12,995, but it definitely has better specs under its hood. If you have the budget, getting the O+ 8.15 is the better option. But the MyPhone A919i Duo seems to be the bang for the buck amongst the three. I would suggest you go to the nearest store and check them out individually. Find out which phone feel best in your hand.

So which phone do you think is better for you? Share your thoughts below.