PCIe based SSD has been around for quite sometime now. Unfortunately they are not readily available to the regular consumers before, due to the high price. Usually large corporations and data centers are the ones who uses PCIe based SSD. Fortunately, the Plextor has released a PCIE based SSD, the Plextor M6e, that breaks the 6Gb/s (600MB/s) speed limit of a SATA 3 interface. Find out more about this new Plextor M6e PCIE SSD below. 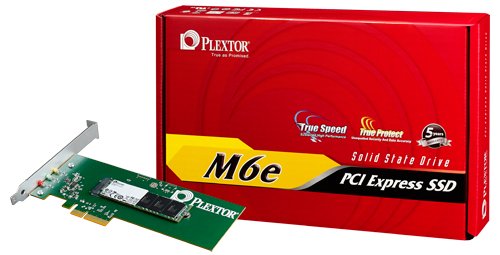 In a few short years SSDs have gone being a storage option for specialist applications to a mainstream storage device found in many PCs. As the technology has progressed high-performance drives such as Plextor’s M5 Pro Xtreme are reaching the 6Gb/s (600MB/s) limits of the SATA Revision 3.0 interface commonly found on motherboards. The solution is to develop PCIe SSDs that use the same high bandwidth PCI Express bus as graphics cards. These new SSDs break through the SATA bottleneck and realize the potential of the latest components. Today we’re going to look at PCIe and the advantage of PCIe SSDs.

The PCI Express bus replaced a number of previous standards and was designed to be incredibly flexible. We’re going to limit ourselves to the simple, possibly brightly colored slots that sit in the center of our motherboard and have a look at the more practical aspects of this standard. Most motherboards come with slots in a range of lengths, this indicates the number of parallel lanes that the slot can use to transfer the data and goes from x1 to x16. A PCIe card with a number of lanes can go in a slot with that number or more, so x2 card can go in a x2 slot or above. The larger slots are used by ultra-fast top-end graphics cards, the smaller ones by things that don’t transfer much data like sound cards. How much each of these lanes transfers is dependent on the PCIe revision/generation (v1.X: 250MB/s, v2.x: 500MB/s, v3.0: 985MB/s). Multiplying lane capacity by the number of lanes gives us a theoretical maximum speed for that slot. Cards are generally backward compatible and the PCIe is full-duplex (data goes both ways at one time, unlike SATA)

Using the PCIe advantage for SSDs

What does PCIe mean for SSDs? Let’s use Plextor’s M6e PCIe SSD as an example, it’s a x2 card so it fits in a 2 lane slot and it’s compatible with generation 2 of PCIe. Most motherboards offer PCIe revision/generation 2 or three so this means that the slot it fits in could theoretically support 1GB/s (2 times 500MB/s); far more than SATA’s 600MB/s. Looking at the specifications, we can see that the SSD takes advantage of this with a 770MB/s maximum sequential read speed, significantly faster than would be possible with SATA. 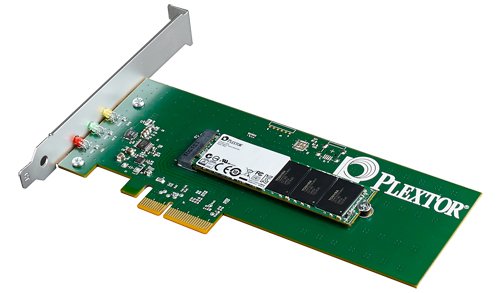 PCIe SSDs aren’t entirely new, but previous models often required proprietary drivers to operate making them inconvenient and creating compatibility issues. Plextor have solved this and managed to make the M6e PCIe is entirely plug-and-play. It conveniently uses the AHCI drivers already built into Windows and Linuix. Plextor have also enabled the user to set the drive to be compatible with legacy BIOSs for booting on older systems and UEFI compatible for very fast boot times on new systems.

The layout of some computer cases and smaller case designs call for PCIe cards to meet HHHL (Half-Height Half-Length) standard. Older PCIe SSDs tended to be full height and were unable to fit, the Plextor M6e uses a HHHL PCIe card making it suitable for any case.

Moving from SATA 6Gb/s to PCIe is allowing a new generation of SSDs to reach amazing performance levels with the M6e leading the way. Through the work of Plextor engineers the limitations of previous PCIe SSD are fast disappearing.