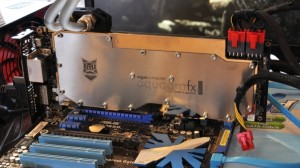 The GTX 590 Beast is such a monster graphics card that it requires water-cooling to extinguish it’s flaming power due to the Beast’s factory overclocked speeds.

A full-coverage AquagraFX water block is bind to the PoV-TGT’s Beast to cool down all the heat producing components of the graphics card. This includes the two GPU, the VRM, the memory chips, bridge chips and basically the whole PCB. The copper and nickel plated water block is made by Aqua Computer and keeps the Beast at around 50 degrees Celsius.

The PoV-TGT GTX 590 Beast is priced between €777.97, and €849.08 or around €800 depending on where you buy it and the location. Well it’s quite an expensive card and is expected when you pair an expensive graphics card and an expensive water block.