Ao no Exorcist 27 Manga Chapter is now available! Chapter 27 is entitled The Decider on Kongou Shinzan!

Ao no Exorcist 27 is now available for read. Ao no Exorcist 27 manga chapter is entitled The Decider on Kongou Shinzan. You can read Ao no Exorcist 27 English scans now. Blue Exorcist is one of my favorite. The first time I watched the first episode, I immediately got hook. This is my kind of anime! Although the story or how the story is presented in the manga is a bit different from the Anime version. 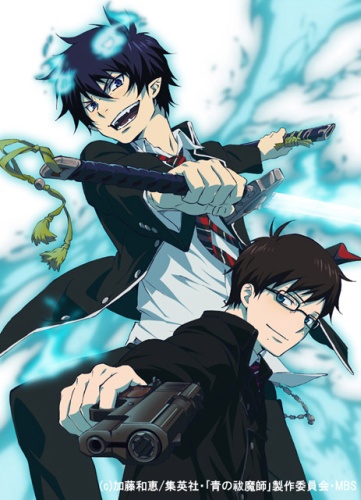 Early part of Ao no Exorcist / Blue Exorcist
The story spins around Okumura Rin, a teenager raised by Father Shiro Fujimoto, possessing great strength and endurance. Soon after Yukio (Rin’s twin brother) leaves to study at True Cross Academy, Rin learns that both him and his brother are sons of Satan, the most powerful of all demons. Witnessing Shiro dying to protect him, Rin ends up doing what his guardian asked him to never do, draw the demon-slaying blade Kurikara that restrains his demonic powers, from its scabbard.

Before Father Shiro Fujimoto died, he entrusted Rin to his friend Mephisto Pheles, apparently a demon too and Rin wished to become and exorcist to avenge Shiro Fujimoto. Pheles enrolled Rin to the True Cross Academy, a Japanese branch of an international organization dedicated to protect the human realm (Assiah) from demons. Rin finds out later that his twin brother, Yukio, was one of his teacher in True Cross Academy…

Ao no Exorcist 27 starts with the line The impure king revived. Rin Okumura and his gang head of to a dangerous path across the forest. Here are the first four scene of chapter 27 of Ao no Exorcist: The Decider on Kongou Shinzan. Read below. Click on image for larger view.

You can continue reading Ao no Exorcist 27 English scans on other manga sites below. Ao No Exorcist 27 – Read Ao No Exorcist Chapter 27. Viz Media has licensed the manga for North American production, with the first volume released in April 5, 2011 and the fifth volume scheduled for release in December 6, 2011. The North American book distributor Simon & Schuster listed the first volume of Kazue Katō’s Blue Exorcist manga for release by Viz Media this April 2011.