Fairy Tail 295 is up next, and this chapter will feature Sting and Lector. Perhaps it will be more of a flash back story on how Sting made a promise to Lector. We might be able to see the power of Dragon Force too in the next chapter. Meanwhile…

UPDATE 2: Fairy Tail 295 is now available. This chapter is entitled Sting and Lecter and will revolve around them. You can know begin reading Fairy Tail chapter 295 on popular manga sites.
UPDATE: It seems that this chapter is delayed. 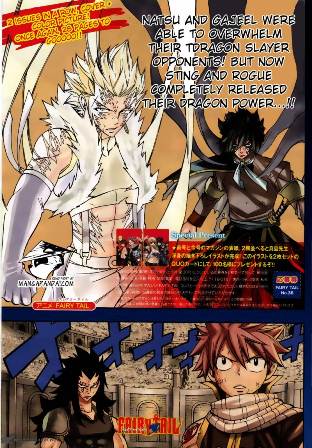 I think Natsu and Gajeel did not even use the full force of their power during the last chapter. But they were still able to land a powerful punch on Sabertooth’s Twin Dragons.

Let’s just hope that Gajeel will be able to activate his Dragon Force on Fairy Tail chapter 295 or on the succeeding chapters. Otherwise he might not stand a chance against Rouge. If the four Dragon Slayers will activate their Dragon Force, it will be an epic battle.

In, the meantime let’s learn more about Sting and Lector in Fairy Tail 295, which will be released this Friday. I’ll post update if ever I found Fairy Tail 295 spoiler or raw scans. But I’ll definitely update this post once Fairy Tail chapter 295 is released. Stay tuned!