Fairy Tail 308 is up next. Natsu, Lucy and the rest are in trouble.  They were trapped in Hell Palace. Worst,  new characters appeared to execute FT, the  Order of Hungry Wolves (Garou Kishidan). They look strong,  can Natsu and the rest defeat them? Find out in Fairy Tail 308. 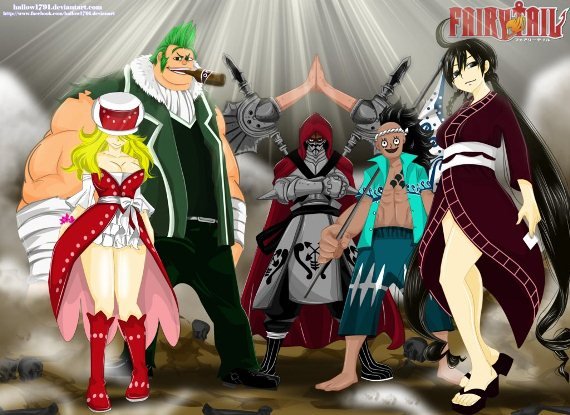 Sting became the next Master of their guild but it looks like Minerva will be controlling Sting. But I don’t think that source of power would be enough for him to win his next battles. It’s true that his power came from his feelings, because he needs to save Lector. But it also comes from fear. He feared Minerva and he will definitely fall into her manipulative hands. On the other hand, I don’t think that Minerva is telling the truth. She might have saved Lector, but I’m not sure about that.

On the tournament, Fairy Tail is on the lead. Gajeel and Erza will probably face somebody stronger from Sabertooth. But I don’t think we will be seeing action from their group in Fairy Tail 308, since the next chapter will focus on Natsu’s group vs the Order of the Hungry Wolves.

Meanwhile, FT will be facing the Order of the Hungry Wolves. Five new interesting characters appeared, two female magicians and three weird guys. They look strong and “hungry”. I guess we will be seeing Natsu, Lucy, Mirajane, Wendy and the rest in action in the next chapter. It’s a 5 vs 5, Natsu will most probably be fighting the masked guy, and Mirajane will probably take somebody stronger from the group.

I’m really excited to see Mirajane in action again. I wonder what type of power will she be using against the Order of the Hungry Wolves. Will she use Take Over Satan Soul or the much stronger Demon Halphas?