Fairy Tail 313 is now available, the first and latest Fairy Tail manga chapter this 2013. Last chapter, we witness the fight between Erza, Kagura and Minerva. The battle was intense but Minerva played dirty. Who will win? And we also saw Lucy from future. How did this happen? Find out in Fairy Tail chapter 313. 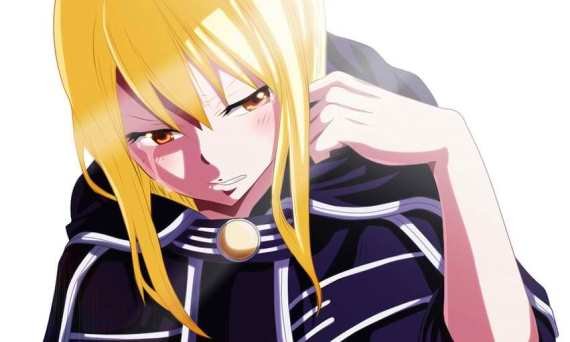 Last chapter was intense! A battle most of us Fairy Tail fans have been waiting, Erza vs Kagura and Minerva. A truly epic battle indeed! All three girls are strong and powerful. Erza and Kagura both use sword magic. But Minerva has a different kind of magic, plus she doesn’t play fair.

Like what I predicted before, Minerva played dirty. Clearly, Minerva is no match for Erza, much more if Erza and Kagura joined forces to fight her. So she played dirty instead, and made Milliana as her hostage. While both Erza and Kagura fight Minerva, Minerva absorbs Milliana’s energy (magic), draining her. Because of this, I think Minerva is really a coward and she’s not that strong at all. Yes, it’s true she knows some really strong magics and spells, but not strong enough to defeat FT.

Meanwhile, the mysterious girl has finally revealed herself. It’s Lucy from the future! I read in different forums that some fans thought that is was Lucy future. And they were right. Come to think of it, it was not impossible at all. Why? Because of the existence of the gate that could make traveling back in time possible.

My guess is something really bad happened during the tournament. Things became messed up and most probably the world is in chaos (in the future, where Lucy future came from). That’s why Lucy needed to travel back in time to stop or prevent those events from happening. Why only Lucy? That’s probably because she’s a celestial wizard and she can travel in different portals and time.

Lucy future had no choice but to reveal herself. The time is almost up for them and the Daimatou Enbu is about to end. Really excited to see how things will unveil. I still don’t know yet what Lucy future will tell them exactly. But I’m sure that Minerva will get her @$$ kicked!