Naruto chapter 629 is just around the corner. The previous chapter was a bit disappointing, honestly. I thought we were going to see the whole big cast in the battle field. And I thought that it was going to be a double issue. But, disappointingly, it’s not. Instead we saw the destructive power of the Juubi, and Obito decided to hit them dead on. But fortunately, we know that Hashirama is coming near, because Madara could already feel his chakra. What will happen next in Naruto chapter 629, let’s find out. 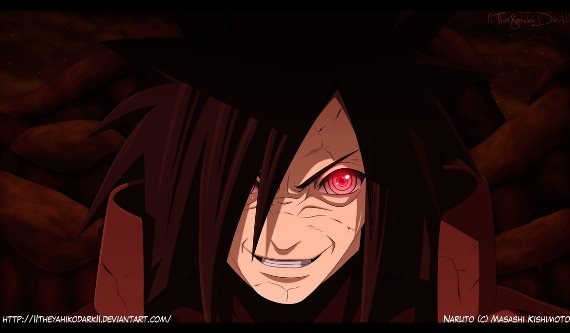 Okay, Naruto Chapter 629 was a bit disappointing. We didn’t get to see what we really want to see. I don’t know about with you guys, but I was a bit disappointed. Anyway, I think Obito is being shaken by their words. So he got irritated and decided to attack them head on.

Kakashi and Obito were teleported or something, and they vanished from the battlefield. I’m guessing that the next chapter, Naruto chapter 629 will be about Kakashi and Obito. They might be teleported or transported to someplace or space so they could have a 1 on 1 match, and a heart to heart talk, just like the old times.

Kakashi and Obito are destined to face each other, and it’s unavoidable. They still need to settle somethings, specially the issue with Rin’s death. I’m not sure if Kakashi talking with Obito will change Obito’s hatred-covered-heart. But I hope it will, and I’m expecting to see that Obito will do one last good will of act before this war is over.

On the other hand, Madara was not threatened that he felt Hashirama’s chakra. Instead he was excited. I think this is what Madara is waiting. Only Hashirama is capable of giving Madara a real challenge. We might not see Madara and Hashirama fighting in the next chapter. But hopefully we will see Madara vs Hashirama before this war will be over.

For Naruto 629 spoiler, I’ll post it here if ever a confirmed spoiler leaks out. Or if someone tips me about the spoiler.