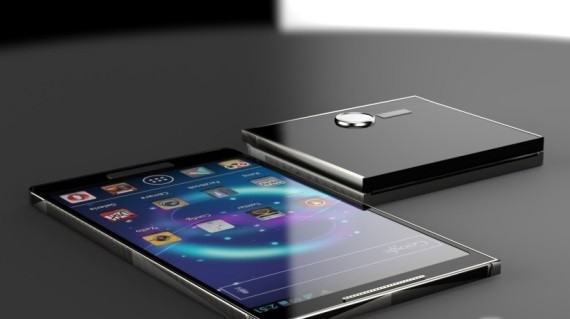 Note: Image above is only a concept on an artist and not the actual unit.

The Samsung Galaxy S5 will also have an eye popping Super AMOLED 2560×1440 display resolution. Expect that graphics and text will be clearer, crispier than any 1080p smartphone. However its display size is still not confirmed. But we are pretty sure that it won’t go beyond or equal to the screen of the Galaxy Note series. Probably the Galaxy S5’s display size would be around 5 to 5.3 inches. It is also possible that a cheaper 1080p variant would also be released.

There was a news before that Samsung is developing a new hardware optical image stabilization which will improve the quality of the images taken. Although it is still not confirmed yet that the Samsung Galaxy S5 will have this feature, source says that the upcoming device will sport a 16 megapixel rear facing camera.

We were also expecting that the Samsung Galaxy S5 would be the first smartphone to run on Tizen operating system. But it seems that it will run on the latest Android 4.4 KitKat out of the box instead. And yes, the Galaxy S5 will have a metal body as well as a plastic variant. I’m pretty sure that the plastic variant will be cheaper than the metal-encased variant. There is also a news that there will be a Galaxy S5 Premium model featuring a diamond coated chassis.

According to the insider that tipped the source, the Samsung Galaxy S5 will be announced in March 2014, so expect a Samsung event to happen sometime in that month. It is also said that the Galaxy S5 will start rolling out the device by April 2014. Based on Samsung’s previous marketing strategy, I guess they will one by one release each variant or model one after another. They probably won’t release all the Galaxy S5 variant in one event.