As you have noticed Samsung is aggressive in terms of releasing different models for their smartphones and tablets. At IFA 2011, Samsung has just unveiled the Samsung Galaxy Tab 7.7 tablet. 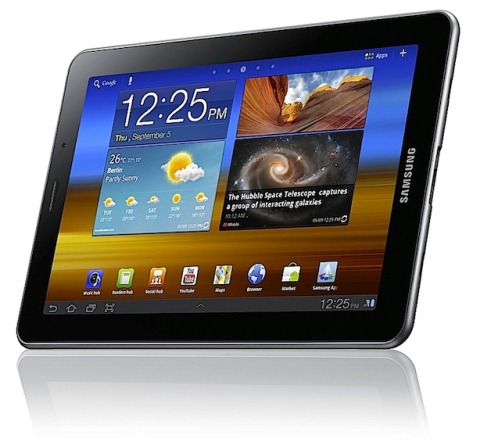 The Samsung Galaxy Tab 7.7 is just like the big brother of the first 7″ Galaxy Tab P1000. Although they have little difference in terms of size, the new Galaxy Tablet 7.7 has higher specifications as compared to its predecessors.

Galaxy Tab 7.7 is built with Super AMOLED Plus display for a more crisp and clear text and images. Super AMOLED Plus is an improved version of the Super AMOLED. It just keeps getting better and better. It is powered by a 1.4GHz dual core processor perfect for multitasking. 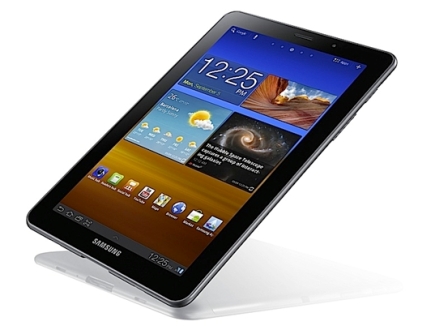 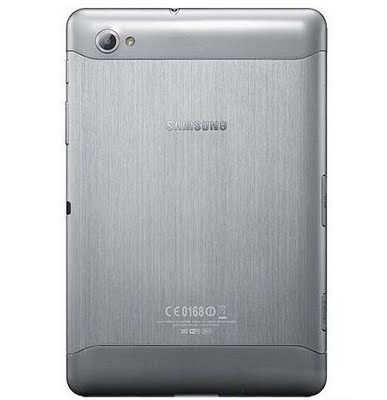 Sleek Design with Ultimate Portability
The Galaxy Tab 7.7 provides ultimate portability and viewing quality within the Galaxy Tab portfolio, featuring a brighter display combined with a thinner and lighter design that easily fits in your jacket pocket or purse. The elegant, linear design features a stylish metal casing and rounded edges for a sleek look that’s comfortable to hold while you’re sitting or walking.

Impressive Speed, Power & Battery Life
The Galaxy Tab 7.7 features HSPA+ 21 Mbps network for faster uploads and downloads. It also supports Wi-Fi Channel Bonding, bonding two channels into one for improved network connection and data transfer at up to twice the speed. The device is powered by a 1.4 GHz dual core application processor for fast web-loading, seamless multitasking and superior multimedia performance. Thanks to a 5,100 mAh battery providing up to 10 hours of video playback time[1], the Galaxy Tab 7.7 does not sacrifice battery life for its ultra-thin design.

Latest 3.2 Honeycomb OS with “Samsung TouchWiz UX”
The Galaxy Tab 7.7 is powered by Android™ 3.2 Honeycomb, Android 3.2 has been optimized for a 7-inch tablet with a new compatibility zoom mode. This optimizes applications that are not designed to run on larger screen sizes, so they fit on the entire screen without distortion. In addition, the tablet supports MicroSD cards of up to 32 GB for direct media files transfer.

Samsung’s TouchWiz user experience is designed with a Live Panel menu for customizing the home screen of the Galaxy Tab 7.7 with digital pictures, favorite Web sites and social network feeds.

In addition, the TouchWiz UX includes a “Mini Apps” tray of commonly used features such as task manager, calendar and music player which can be launched while other major applications are already in use. The clipboard feature allows users to copy and paste texts and images.

Voice and Video Support for Better Communication
The Galaxy Tab 7.7 offers both voice and video calls for better communication. There is no need to bring a headset and BT for voice calls. In addition, it is possible to call privately in public places with Receiver Mode.

Google™ Mobile Services
The Galaxy Tab 7.7 is preloaded with the full suite of Google Mobile Services including access to more than 250,000 applications on Android Market™, Gmail™, Google Search™, Google Maps™ 5.7 with 3D maps, and Google Talk™ with video and voice chat.