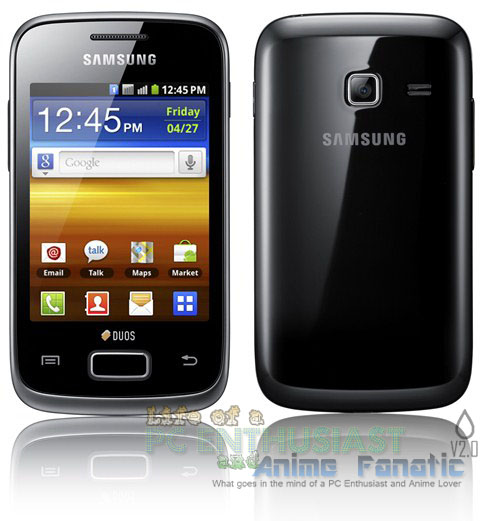 To give you a clearer view on their main differences, let’s compare their specifications and see what has changed. Below is the Samsung Galaxy Y Duos specifications compared to Galaxy Y S5269 specs.

I did not include the other specifications since both of them have it. Although it is still not confirmed, Samsung has added SNS integration and HTML and Adobe Flash for the Galaxy Y Duos’ browser.

Now that we have their specifications compared, we can see some changes from the Galaxy Y to Galaxy Y Duos. First, the CPU or the Central Processing Unit of the Galaxy Y Duos is faster by 2MHz only. Not a great improvement but Samsung has significantly increase the ROM and RAM of Galaxy Y Duos, from 180MB ROM and 290MB RAM to 512MB ROM and 384MB RAM.

The sensor for its camera is already increased. From 2 megapixel to 3.15 megapixel, and a video capture capability of 15 frames per second to 24 frames per second. Although there are no camera samples or photo samples taken using the Galaxy Y Duos yet.

And of course, the Samsung Galaxy Y Duos is a dual SIM smartphone, meaning it has two slots for two SIM cards and can switch from one network to another instantly.