Smartphones nowadays just keep getting better and better. At the same time it’s becoming more affordable, specially for those who are in a tight budget. Last year, Samsung has released the Samsung Galaxy Y S5360, that became one of the most popular smartphones locally. Everywhere I look you see people using one. It entered the market with a price of only Php 5,999, killing those smartphone-imitations and iPhone look-a-like sold in the black market. And recently, Sammy released another smartphone that is even more affordable the Samsung Galaxy Pocket S5300, targeting students and youngsters who are really on the tight budget. Today let us compare the two entry level smartphones; Samsung Galaxy Y vs Samsung Galaxy Pocket. 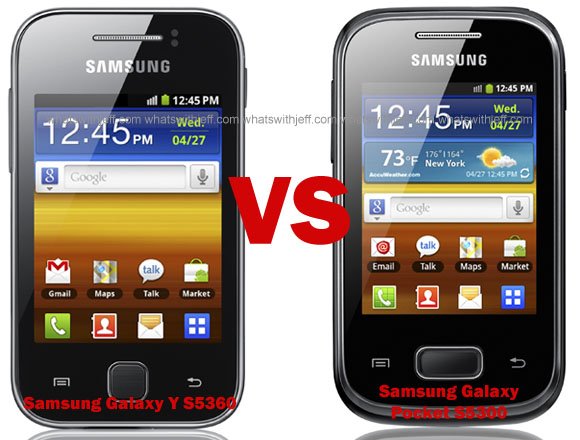 Now that we have their specifications side by side, let’s see who has the better features. I’m not going to include in this section the LG Optimus L3 since the main topic is just about the Galaxy Pocket and the Galaxy Y. And what we are going to compare in this section are the specifications that only has a significant difference over the other. If I did not mention it in this portion, meaning they are just on par with each other.

The Samsung Galaxy Pocket is a little bit smaller compared to the Galaxy Y. I don’t know if smaller is favorable to you, but the winner here depends on whose hand is going to use it. My problem with smaller-sized phones is that they slip on my hands easily. Plus their screens are small and it’s a little bit difficult to type in QWERTY mode. So it’s up to the user who will be the winner here.

The Processor and Storage Capacity

Despite its smaller size, the Samsung Galaxy Pocket has a little bit more horse power than the Galaxy Y. The difference is just 2MHz, you could barely notice any difference at all. They both have the same memory size of 290MB RAM.

The Samsung Galaxy Y has a larger screen size of only .2 inches and they both have the same resolution of 240×320. But the Samsung Galaxy Pocket has more pixels per inch density of 143 compared to Galaxy Y’s 133 ppi. But I don’t think the difference is that obvious.

Sometimes people ignore this specification, perhaps they do not understand it clearly what does the HSDPA/HSUPA speed has something to do with your smartphone’s performance. Well, ever wonder why your download and upload speeds are slower despite that you have a strong WiFi and fast internet connection? That’s because the hardware built with your smartphone is not designed to handle such speeds.

In this case, the Samsung Galaxy Y has a faster data transfer speed of 7.2Mbps compared to that of Galaxy Pocket which is only 3.6Mbps. If you think 3.2Mbps is fast enough, think again. The HSDPA speed of 7.2Mbps was introduced years ago, way before the smartphones become popular. And most of the people who rely on their mobile devices to access the internet need a faster internet or WiFi connection. That’s why they go for smartphones with 3G or even LTE connectivity.

I really can’t tell you that the other one is better than the other, and you should go for this instead of that. It’s really up to you. It depends on how much is your budget and what for are you going to use your phone. But if you want to experience a smartphone and you are really on a tight budget, then perhaps you could try the Galaxy Pocket. But if you want something better than the Galaxy Y, then you might want to check on the Samsung Galaxy Y Duos, that is priced a little bit higher since it has dual sim functionality.

I hope this article helped you. If you like this article, please do consider sharing this with your friends or to your network.