In the previous Naruto chapter 553, Sasuke’s Eternal Mangekyou Sharingan was finally revealed! A lot of Uchiha Sasuke’s fans were waiting for him to appear with his newly attained powers, thanks to his brother Uchiha Itachi. 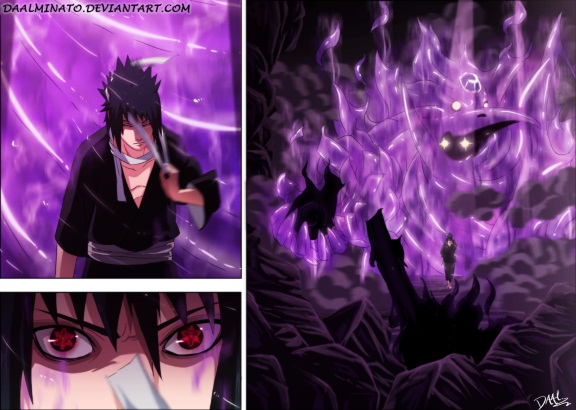 In the last pages of Naruto 553, Sasuke, I think, was trying to escape. Unfortunately the white Zetsu was on his way and was the first one to taste the wrath of Sasuke’s Amaterasu. In the depth of darkness, Sasuke revealed his Eternal Mangekyo Sharingan.

There are only two from the Uchiha clan who can use the “Eternal” Mangakyo Sharingan. The first one is Marada, and the other one is no other than Sasuke.

The Eternal Mangekyou Sharigan or Eien no Mangekyō Sharingan is a very powerful technique. Not only that the user will not go blind from using it, he has also unlimited access to great powers.

Unfortunately, Sasuke has yet to appear again in Naruto chapters. Perhaps Naruto will have to defeat the Edo Tensei Jinchuriki and their tailed beast plus Tobi, before Sasuke will come in the picture.

I’m not really sure if Sasuke is still an antagonist here, now that he has achieve Eternal Mangekyou. Perhaps after Naruto defeats Tobi, it’s Naruto and Sasuke’s turn to fight. Remember, one of Naruto’s mission is to bring back Sasuke to Konoha, to their side.