SoftBank has just unveiled the first ever “Yahoo! Phone” and announced the availability in Japan. This SoftBank Yahoo Phone, although distinguishably built with various Yahoo features, is powered by Google Android 2.3 OS, also known as Gingerbread. 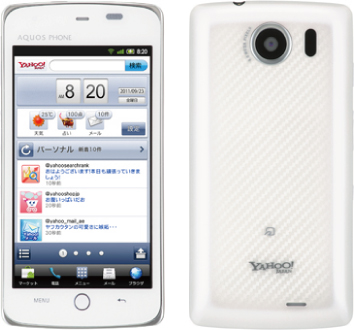 Why Yahoo Phone in Japan you might ask?
In Japan, Yahoo is the biggest and largest website. SoftBank is the third largest mobile carrier in Japan. And SoftBank happens to be the biggest shareholder of Yahoo in Japan. Thus the birth of SoftBank Yahoo Phone.

Let’s take a look at what SoftBank’s Yahoo Phone is made of. The AQUOS PHONE THE PREMIUM SoftBank 009SH Y, a.k.a the Yahoo Phone, is basically identical to 009SH, well most of it. It features a 4-inch LCD with QHD resolution (960 x 540 pixels), an 8 megapixel rear facing CMOS camera, WiFi, microSDHC, Bluetooth 3.0, digital TV Tuner and more.

But the interesting feature that SoftBank Yahoo Phone has is it supports both CDMA and GSM signals. Meaning there is a big possibility that not only it could be used domestically in Japan, it could also be used around the world.

SoftBank Yahoo Phone is pack with different apps for Yahoo Japan, like the ones you see in Yahoo’s website. SoftBank also announced that purchasing the Yahoo Phone or AQUOS PHONE THE PREMIUM SoftBank 009SH Y will entitled them for two years of free membership at Yahoo Premium and more.