The age of 3D has already started. First the big screens, then in our home theater and now in our mobile laptops. In the last CES 2011 held on Las Vegas, Sony has introduced a new 3D experience in mobile laptops, the VAIO-F series 3D laptops. Sony VAIO F 3D Laptop specs can be found below. 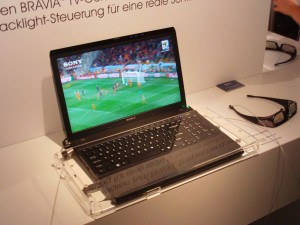 Sony’s VAIO-F 3D laptop has to be the most impressive of all 3D laptops that were introduced. VAIO-F is powered by Intel’s Sandy Bridge processors and offers the best 3D experience in mobile laptops.

It took quite some time for Sony to develop the VAIO-F 3D series because they wanted it to be perfect. Let’s take a look at what VAIO-F is made of at the specs sheet.

As you can see in the specs sheet, Sony’s VAIO F 3D Laptop is really made out of the latest technology and brings the most impressive entertainment experience Sony has to offer. But this kind of laptop doesn’t come cheap. The SRP here in the Philippines is around a whooping Php149,999. International SRP is said to be starting at $1,700. The price still varies because the specs can be changed according to the options provided and to your preference.

VAIO-F series uses active shutter glasses that have 8 transmitters on its frame for better 3D viewing angles. The shutter glass is powered by a small battery same with the one we used in watch and will power down automatically once the laptop stops sending 3D signals.

A 3D button is provided that turns 2D movies in to 3D so you can enjoy your movies on Blu-Ray or DVD on 3D. This 3D button is not common in other 3D laptops. The VAIO-F can also be connected to HDTV or 3D HDTV through the HMDI if you want a larger viewing experience. The S-Force front surround 3D system and Dolby® Home Theater v3 makes it possible for the VAIO-F series to deliver outstanding sound effects. This feature is also not common in other laptops.

VAIO-F 3D laptop is really impressive and hands down. I give it two thumbs up! This has got to be the best 3D laptop I have seen so far, and quite expensive too. Sony VAIO-F 3D laptop will be available soon.