Sparkle Computer Co., Ltd. has introduced a new graphics card, The Calibre X570. This graphics card is very promising. Calibre X570 is equipped with lots of state of the art technology and superior cooling performance by Accelero Xtreme.

Click image below to see full size, it will open in a new window.

Let’s check out what this new graphics card is made of. Here is a brief Calibre X570 specs sheet.

“The radical optimized air flow design is targeting to cool effectively up to 225 Watt heat dissipation. The Accelero Xtreme can dramatically cool the temperature of the GTX 570 GPU at least 15ºC lower than the stock cooler.”

With Accelero Xtreme, it enhances the Overclocking capability of the Calibre X570. But not only that, it also extends the card’s MTBF. 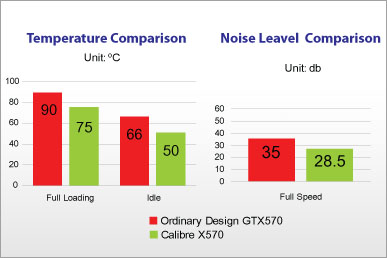 “Compared to reference GeForce GTX 570 graphics cards on market, the the Calibre X570 Graphics Card is overclocked out of box, it boosts the core, shader and memory clocks significantly to 772MHz, 1544MHz and 4212MHz, bringing better performance in the latest DX11 games. “ 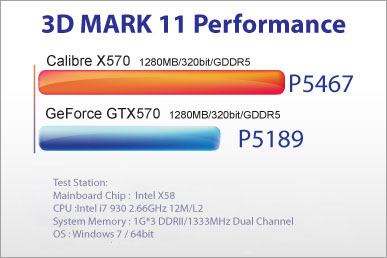 “The Calibre X570 Graphics Card supports recursion in hardware, enabling efficient ray tracing and a host of other graphics algorithms. It excels not just at standard ray tracing, but also at advanced global illumination algorithms such as path tracing.”

6. Tessellation Power Brings Incredibly Detailed Visuals
The introduction of DirectX 11 and NVIDIA’s GF110 made possible for graphic card developers to use the power of Tessellation for gaming applications.

“Tessellation allows game developers to take advantage of the GeForce GTX 570 GPU’s ability to increase the geometric complexity of models and characters to enables incredibly detailed game characters and terrain with blazing performance in latest DX11 titles, such as Lost Planet 2, Metro 2033 and so on.”

7. Advanced DX11 Rendering Architecture
“The Calibre X570 Graphics Card brings a host of the next generation of gaming calculation – GF110 never before offered for the PC — including tessellation, DirectCompute and all other DirectX 11 hardware features. GF110 architecture is specifically designed to support next generation gaming effects such as ray tracing, order-independent transparency, and fluid simulations. By using GF110 architecture, the Calibre X570 Graphics Card gets a tremendous boost in DX11 game performance and image quality, and brings film-like game characters and objects to users. GF110 architecture also enhances PhysX simulations with tremendous speed upgrade. In addition, GPU computing now can be put in practice in latest DX11 games for improve DX11 gaming efficiency.”

This could change the “looks” of Sparkle Graphics Card in the eyes of PC Enthusiasts. Most PC enthusiasts would prefer graphics cards from Asus, EVGA, Palit, MSI, HIS, or Inno3D. But Sparkle’s Calibre X570 might catch the attention of PC enthusiast.

The only thing that we are waiting is a legit review that would prove its capability and if it really delivers the performance that it claims.