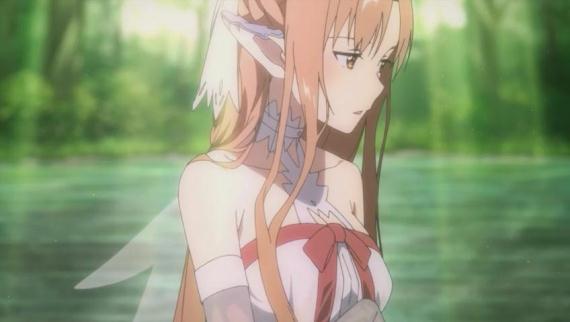 WARNING: From this section forward, this contains heavy spoiler and some brief information on what is about to happen next. Kirito saw an imaged of an Elfen Asuna.

Egil/Agil showed Kirito an interesting image of Asuna being trapped in another VRMMORPG. He also showed to Kirito the new VR technology, the AmuSphere. The AmuSphere is basically like an upgraded or enhanced version of the Nerve Gear. A new company was created while they were still trapped in SAO, so basically they did not have any idea about AmuSphere at all.

Egil(Agil) also Kirito about ALfheim Online, where he got the picture of the captured Asuna. It’s a new VRMMORPG like Sword Art Online except that it’s more of an Elf-themed game. ALfheim means “Elf Home“. In ALfheim Online the skill system is extreme. Players are encouraged to do PKing (player killing). But if you die in this game you can still be revive and you won’t be trapped in this game, unlike in SAO. Agil further explained that ALfheim Online relies on the player’s own athletic skills and not on a character’s class. The great thing about ALfheim online is that the player has the ability to fly, (as you have probably seen during the intro MV).

Kirito wants to play ALfheim Online to confirm something. He wants to try and save Asuna whose consciousness is still trapped in a new VRMMORPG. Kirito suspects that his fiancé Sugou Nobokuyi is behind this and he might know why Asuna is still not awake.