Sword Art Online 21 was recently released, the episode was entitled The Truth of ALfheim. This episode revealed some shocking scenes that involved Asuna. What happened? Please continue reading below. But before that, please be informed that this Sword Art Online 21 Review contains heavy spoilers. If you haven’t watched the episode yet and don’t want to get spoiled, I suggest you watch the episode first. 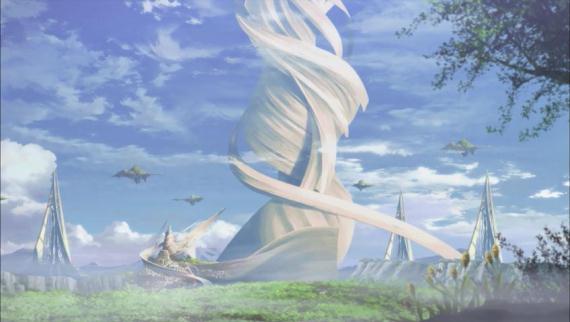 Kirito and Lyfa has finally arrived at the central capital city of Aarun (Arun). It’s a neutral territory and it’s also located at the foot of the World Tree. Here in this city, you can see tons of players from different class / race. Kirito and Lyfa then decides to find an Inn to rest and log out.

On the real world, Kirito and Sugu decided to visit Asuna in the hospital. Kirito properly introduced Sugu to Asuna. But as Sugu watched Kirito holding Asuna’s hands, she felt a sharp pain in her heart for she knew she could never tell her true feelings to her own brother. That’s incest for crying out loud!

Poor Sugu, she’s a nice girl but, unfortunately for her the one she loved is her brother. This kind of twist in the story is not common but combining it with ALO, the virtual world, Sugu a.k.a. can freely express her feelings to Kirito without being noticed.

Unfortunately for Sugu, again, Kirito is in love with Asuna both in the real world and in SAO/ALO. So either way, her main role would end up supporting Kirito until he rescues Asuna.

I’m sure Kirito will discover that Lyfa and Sugu is one. Here’s a spoiler, Kirito will find out that Sugu is her sister in ALO. And it will happen very soon. 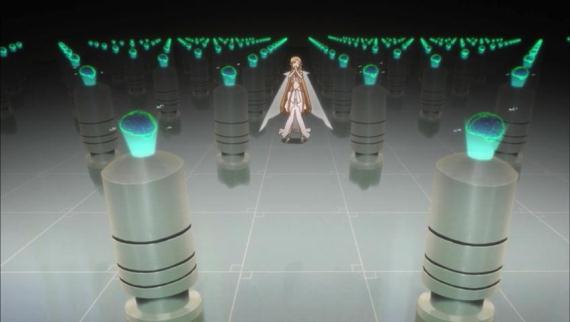 Meanwhile, Asuna was able to escape from her cage by memorizing the code. She was not able to see the numbers because it was censored somehow, but she was able to memorize the pattern. Asuna stumbled into a huge laboratory. She found out that it is were the virtually trapped players were kept and being experimented on.

Those are the actual cyber brains of the trapped players. I wonder how is this concept or theory related to Ghost In the Shell? Anyway, Asuna tries to escape when she discovered the console but she was seen by the two slug scientist working there.

This scene was some what shocking. You might think that the world of SAO or ALO (Alfheim Online) is just all about VR MMORPG, but the admin use it further for their own selfish desires. As seen in the previous episodes, some administrators or even players use ALO for their pleasure, including in this episode.

The slug-like scientist tries to “play” with Asuna. She was suspended upside down by the slug’s tentacles. You will be seeing a short “tentacle-action” in this episode. But Asuna pretended that she gave in. When the slug was about to put one of its tentacle in Asuna’s mouth, she suddenly bit it. 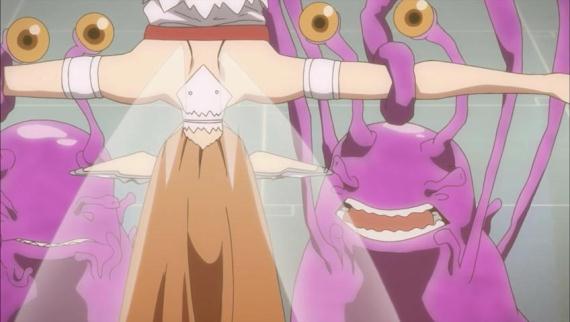 Fortunately for Asuna, that slug scientist forgot to turn off the pain observer, thus he was able to feel some pain and stopped. The other slug scientist returned and was informed by their boss to return Asuna to her cage. But Asuna was able to get the ID Card or Key Card before she was returned to her cage. Right now, the card that Asuna is holding is her only chance. But without a console it would be useless.

Back to Kirito and Lyfa, the moment they arrived at the foot of the World Tree, Yui came out telling that she was able to detect Mama’s Player ID (Asuna). And without hesitation Kirito spread his wings and flew as fast as he can. Lyfa tried to stop him but it was too late. The episode ended here.

There were no fighting scene in this episode but we did get to know more about ALO or Alfheim online. From the player’s point of view, ALO was just a game. But in reality it was a huge lab experiment for the creators.

It would be great to have a game like this become a reality in the near future, but it’s also scary. What if something like what happened in Sword Art Online really happens, and your thoughts are trapped in the VR world, while your body is in a coma?

Up next is SAO 22. Check out my Sword Art Online 22 spoiler.