Sword Art Online 22 is now available!. SAO episode 22 is entitled Grand Quest. Kirito was able to reach the foot of the World Tree at last, with the help of Lyfa (her sister). But Yui was able to detect Asuna’s presence. Kirito immediately flew above as fast as he can just to reach Asuna. Will he make it? Find out in Sword Art Online episode 22. Or you might want to read the spoiler below to get a sneak preview of the next episode. 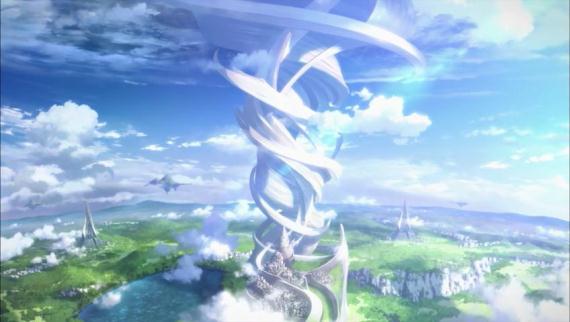 WARNING: The section below contains spoiler on SAO episode 22.

Kirito flies straight up as fast as he can
Lyfa follows Kirito
The scenery changed as they flew farther
Kirito hits the barrier
Yui came out and tries to call Asuna “Mama mama…”
Asuna thought it was imagination at first, but as Yui repeatedly called her,
Asuna recognized the voice and tries to look for the source of Yui’s voice
Asuna gets the Silver Key Card and throws it out into the air
Hoping that Kirito would reach the Key Card
Just as when Kirito was about to go mad the silver Key Card feel onto him
Yui tries to analyze it and found out that it was an access code for system management
But it was useless without a console
Kirito then decides to enter the World Three through its gates
Lyfa told him where it is located but she also told Kirito that it is impossible since it was guarded by strong guardians
Kirito was able to reach the gates and was granted unlimited use of his wings
Kirito’s grand quest begins here as he will face much more difficult battles

Sword Art Online 22 is a much watch episode for SAO fans. Kirito will start his grand quest and he will face and fight hundreds of guardian alone to reach the top of the World Tree. It is expected that we will be seeing more action from here on and who knows, the next episode may show us some of the best fighting scenes we have yet to see in Sword Art Online.