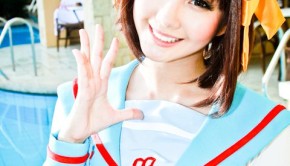 Here we have our Cosplay Queen, Alodia Gosiengfiao doing cosplay in Boracay when they had their Kidlat Awards 2011. Alodia

Arrgghh! It was all but an April Fools joke from Alodia Gosiengfiao. Last March 31, 2011 I made a post

This girl is simply amazing. She will wear any costume that she likes. She likes wearing Anime costumes and participate