If you are still using an old bulky laptop, this 2013 try to get a Touch Ultrabook. Why a Touch Ultrabook? Nowadays, laptops and netbooks are one of the most productive device/gadget that you could have. From office work to entertainment or gaming, people use latops for all sorts of things. But a laptop can be bulky and heavy, whereas a netbook is more easy to carry, but it may not provide the enough processing power that you need. This is where Touch Ultrabooks comes in. It’s fast, sometimes faster than you typical desktop computer, it’s lighter and easier to bring than a laptop. So out of the many Touch Ultrabooks out there in the market which one should you get? Below are some of the latest and must have Touch Ultrabooks this first quarter of 2013.

Touch Ultrabooks are the next generation of ultrabooks. All Android tablets and iPads are touch screen, why not a laptop as well? Most of the must have Touch Ultrabooks below have similar specifications, runs on the same operating system, capabilities and processing power. The only thing that sets them apart is their brand, design and price. So it’s up to you (the buyer) which one will you buy. It all comes down to user preference and your budget.

The Asus VivoBook S400CA-DH51T is a 14.1-inch Touch Ultrabook that is powered by a 3rd generation Intel Core i5 3317U processor clocked at 1.7GHz and runs on the latest Windows 8 operating system. It’s built with 4GB DDR3 1600MHz memory, and its graphics processor is powered by an Intel GMA HD GPU. 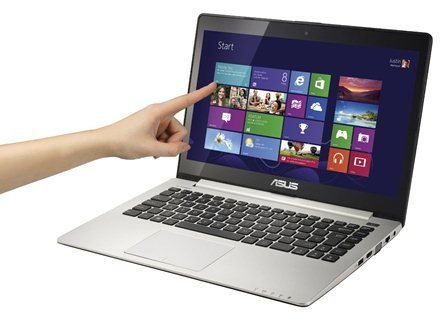 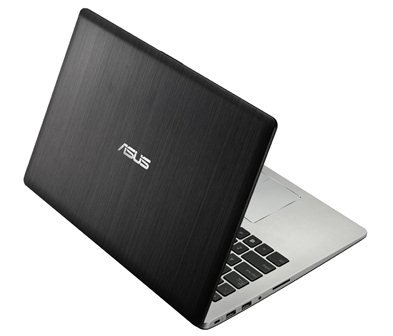 The Asus Taichi 21-DH71 11 inch convertible is one of the unique Touch Ultrabook produced this 2012. It features a dual display, one inside the ultrabook and the other is at the backside, or the surface of the ultrabook. 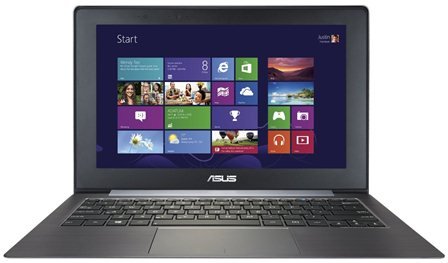 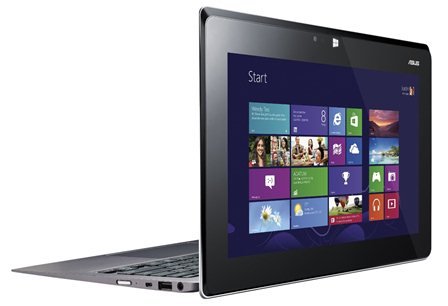 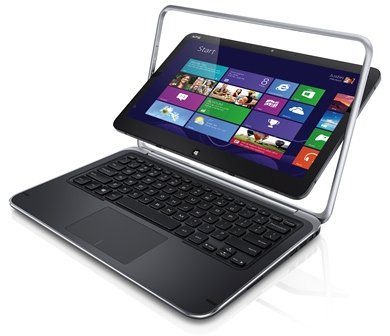 The Dell XPS 12 Convertible is another unique Touch Ultrabook. It’s basically a 12-inch ultrabook that can be converted to a tablet just by flipping the display. It can be powered by a 3rd generation Intel Core i5 3317U or Core i7 3517U and runs one the latest Windows 8 64-bit OS. 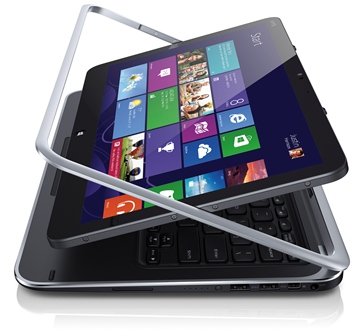 The Dell XPS 12 Convertible is built with a 12.5-inch FHD 1080p multi-touch display with 4GB to 8GB or DDR3 RAM, 128GB to 256GB Solid State Drive storage and GPU is powered by an Intel HD 4000 graphics processor. It’s body is made out of Carbon Fiber material, very light yet stronger than your typical aluminum. 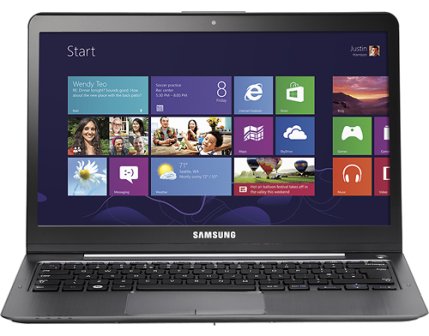 Another alternative for the Samsung NP540U3C is the Samsung ATIV Smart PC Pro. It’s like an Asus Transformer that runs on Windows 8. You can easily switch from laptop to tablet mode. The ATIV Smart PC Pro features the revolutionary S Pen for writing and more creative output. 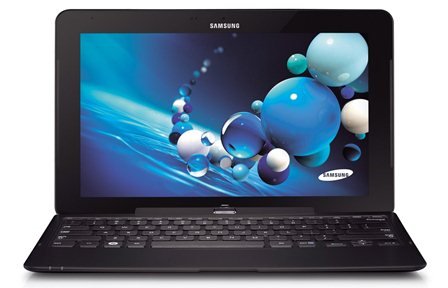 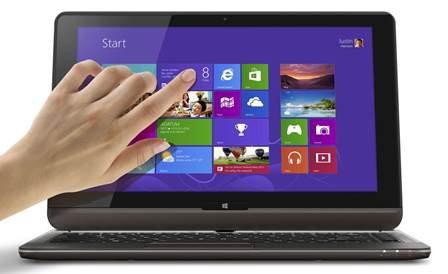 The Toshiba Satellite U925T-S2300 is another convertible touch ultrabook that can easily be transform from an ultrabook to a tablet, just like some of the convertible touch ultrabooks mentioned above. It is powered by a 3rd generation Intel Core i5 3317U processor clocked at 1.70GHz, with 4GB DDR3 RAM, and a 128GB SSD for storage. It has a nice 12.5-inch display at 1366×768 resolution (16:9 aspect ratio), protected by a Corning Gorilla Glass, and powered by an Intel HD Graphics 4000 GPU. 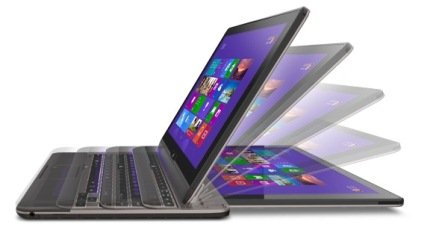 The Sony VAIO T13 is another great ultrabook. It’s a 13.3-inch Touch Ultrabook that is powered by an Intel Core i3 processor clocked at 1.8GHz. It’s not as powerful as the Core i5 and Core i7 powered Touch Ultrabook, but it’s built with a 500GB hard drive with a 32GB solid state drive. It also runs on the latest Windows 8 OS. 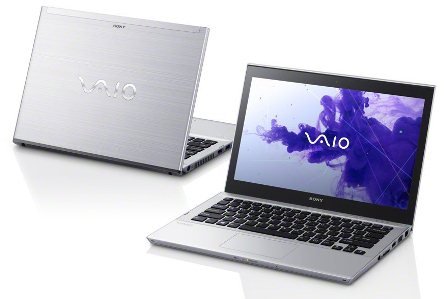 The Sony VAIO T13 comes in a Touch and a Non-Touch variant for a much cheaper price. This touch ultrabook is rated 4 out of 5 by satisfied customers. You can see more details about the

The HP Envy 4 TouchSmart Ultrabooks have a plain, simple yet elegant design. We have two options for the HP Envy 4, there’s the higher version the Envy Touch Smart 4t-1100 powered by an Intel Core i5 processor clocked at 1.7GHz, 6GB 1600MHz RAM, 32GB mSATA SSD + 500GB HDD and runs on Windows 8 operating system. 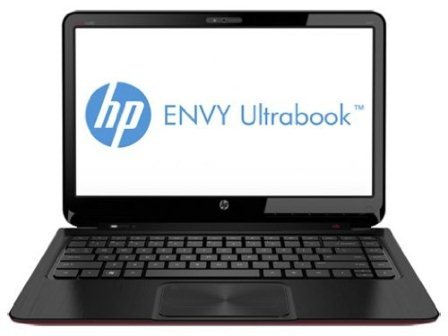 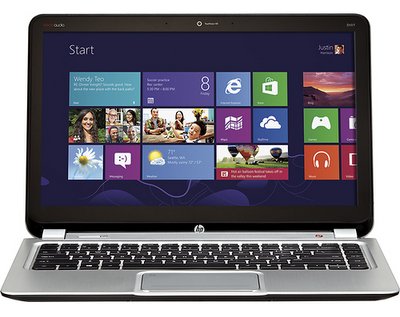 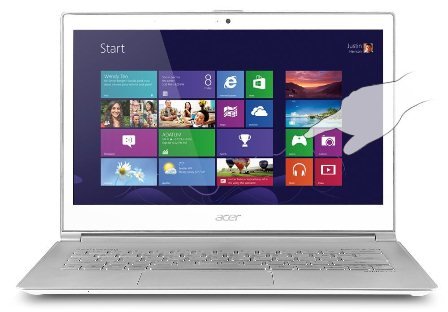 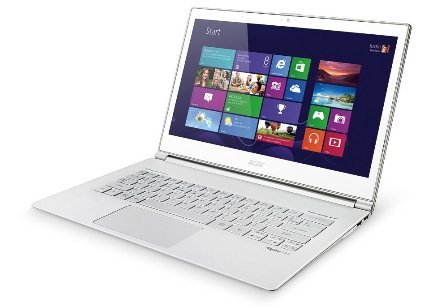 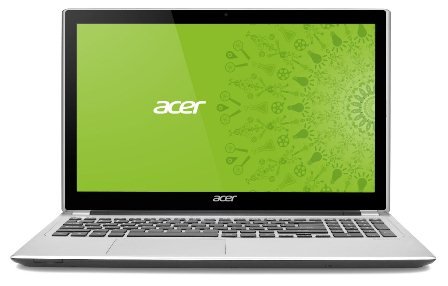 An alternative to the Aspire S7, is the Acer Aspire V5 that features a 15.6-inch Touch screen display. 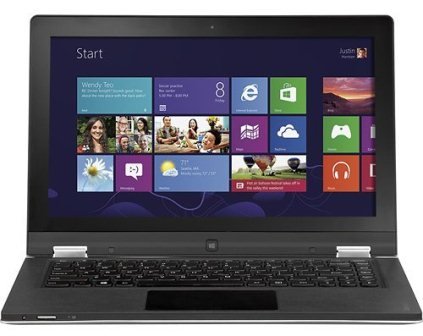 The IdeaPad Yoga 13 from Lenovo is a 13 inch touch ultrabook where you can literally flip its display 360 degrees instantly converting it from a laptop to a tablet. It is powered by a 3rd Generation Intel CoreTM i5 processor, running on Windows 8 64Bit operating system. Its 13.3-inch display features HD+ IPS display delivering crisp and rich display. 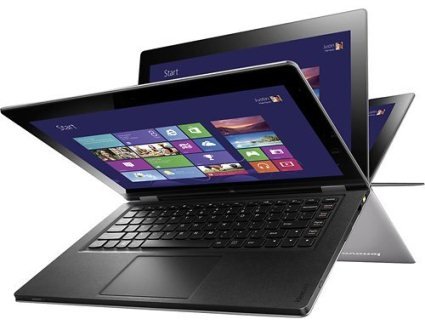 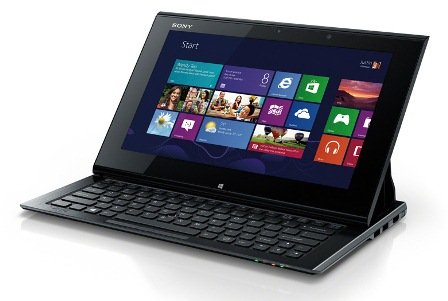 The Sony VAIO Duo 11 Ultrabook has a nice 11.6-inch full HD touchscreen display, runs on Windows 8 64bit operating system, has a front and rear 2.4 megapixel webcams, and is powered by either a 3rd generation Intel Core i7 processor of an Intel Core i5 processor.