You might be wondering this is another “overclock” thingy, tweak some settings and make your Radeon HD 6950 to perform like HD6970. But this is not. The keyword here is “unlock”. Just like when you buy a AMD Phenom II X2 and unlock it’s core to become quad cores. How? I will show you how to unlock your HD6950 to HD6970…

If you have purchased HD6950 and might want to upgrade to HD6970, you might as well want to try this first, to save you the cost of buying a new video card. 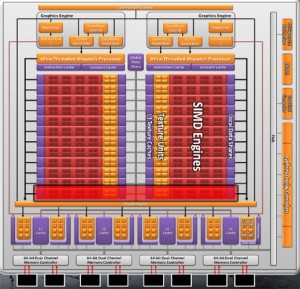 The picture above shows the disabled HD 6950 shaders in red. When unlocked, these deactivated units become active, resulting in a substantial performance increase.

AMD has two methods of locking the shader count on all of their recent GPUs. The first one relies on fuses inside the GPU, or on the substrate – a mechanism similar to Intel’s multiplier locking. It is not reversible as far as we know. The second mechanism is the one we are interested in, AMD can configure the VGA BIOS in a way that it disables extra shaders, in addition to the ones disabled via the on-die fuses. This method is mostly used to create engineering samples or reviewer cards that match the target specifications. Usually production cards come with the shader count configured in the fuses, so that it can not be changed.

Apparently currently shipping Radeon HD 6950 cards from all manufacturers – which actually are all the same card with different sticker – have their shaders locked via the BIOS method, so we can exploit it easily. 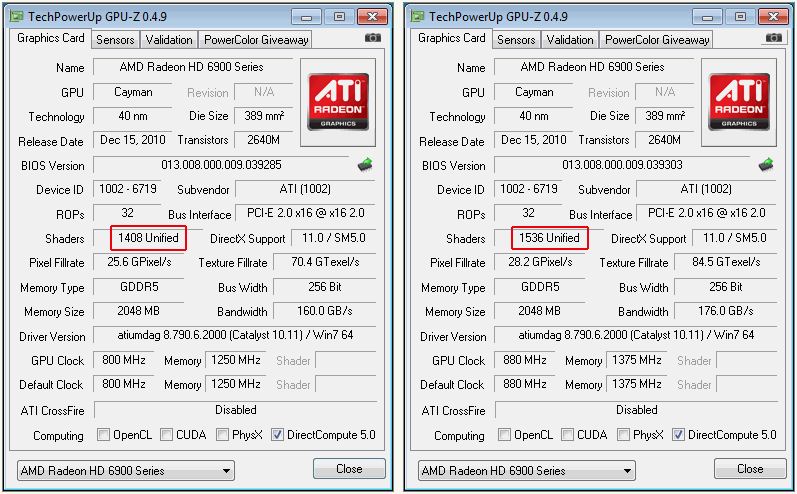 I know your curious already on how to perform the modification to turn your HD6950 to HD6970. And if you have an HD6950 you are already itching to try this new mod.

So here it is, proceed here, at TechPowerUp!’s site.