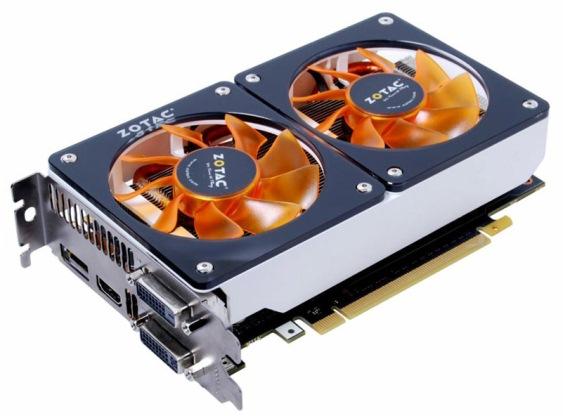 The Zotac GTX 670 TwinCooler is 60mm shorter than the reference NVIDIA GTX 670 reference card. Its cooler is made up of dense aluminum fins with copper heat pipes that directly contacts with the GPU. The aluminum fins are then cooled by two 80mm fans (that’s just about a total of ~160mm in length). This card only consumes two expansion slots but it almost touches the third expansion slot due to the fans.

Like I said in the title of this article, The Zotac GeForce GTX 670 TwinCooler is small but powerful. Check out the specs below.

If you are familiar with the reference card, the GTX 670 TwinCooler has overclocked settings. The reference settings are just 915MHz core clock, 980MHz GPU boost and 6008MHz memory speed.

This tiny card gets its power from two 6-pin PCIe power connectors and is capable of a 3-way SLI configuration. It has two DVI connectors, one HDMI and one DisplayPort connectors. According to source, Zotac will release the GTX 670 WinCooler on June 20. However there is no information yet about its price. Most probably it will be more expensive compared to a reference GeForce GTX 670 graphics card.

You might also want to check out the latest price and reviews of the following: