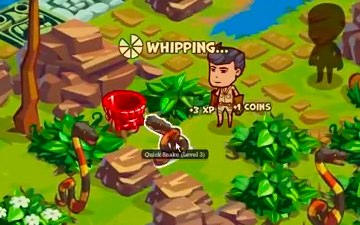 People who were tired of Farmville moved to a more exciting game called Frontier Ville. And soon the farmers move to the city with CityVille. Now are you bored with the same old CityVille and FarmVille? Then you might want to try Zynga’s “adventurous” game, Zynga Adventure World.

According to Mashable, “Grab of life by the boulders!” seems to be the overall slogan of the new game. In this game, you play a character like Indiana Jones. Going to different adventures. Watch the teaser video below.

Although this game is new and claims to be “adventurous” by nature, the animation style and game play is more like the ever popular FrontierVille and CityVille.

Unfortunately, the release date for Adventure World was not yet disclosed. Currently, Zynga’s latest game release is The Pioneer Trail and Hanging with Friends.

Zynga’s Adventure World Cheats and Tips will be posted as soon as the game is up and running. For now we will have to wait for the game to go live. I’m sure there are lots of Adventure World secrets to be discovered.