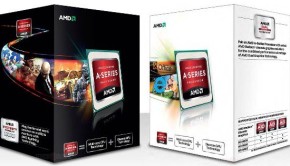 AMD has recently announced its 2nd Generation A-Series Desktop APU processors that are based on Trinity architecture. The new 2nd