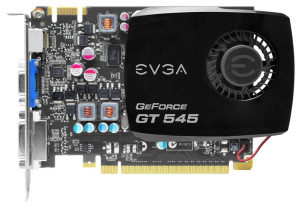 HDMI 1.4a Support
Support for HDMI 1.4a output enables sending both high-definition video and audio signals to an HDTV via a single cable.

EVGA has adapted the reference design for the GeForce GT 545 that has a short PCB and is cooled by a single-slot cooler.

EVGA GeForce GT 545 1.5GB is priced at $150 USD and comes with a 10 year warranty if purchased this month. That’s quite a long warranty period if you ask me.