Yehey! Patapon 3 is now available. This drum-beating, rhythm game was recently released last April 2011. People are going crazy about this game. Patapon 3 gameplay is mostly unchanged but new and interesting characters, Hero and worlds are present in this game. 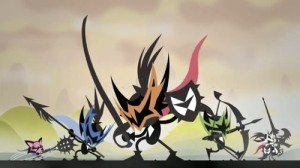 Patapon 3 is like a charged-up, electrified version of Patapon 2 with lots of surprises and new enemies to defeat. Since the release of Patapon 3, and because of it’s popularity, people have been trying to download Patapon 3 by searching “Patapon 3 download” in search engines.

Patapon 3 Game Plot: The Patapons found a mysterious box after they have completed constructing the bridge in Patapon 2. When the Patapons opened the box, 7 evil spirits where released and turned all the Patapons into stones except for our hero, Hatapon. After that, a silver Hoshipon came out of the box and revives our Hero turning him into Uberhero Patapon. Now Uberhero Patapon, with the help of Ton, Kan and Chin are on a quest to defeat the seven evil spirits.

This game was given a rating of 9.0 “Amazing” and an Editor’s Choice seal from IGN. Watch the actual gameplay of Patapon 3 video below by IGN:

Now where can you download Patapon 3? If you liked Patapon, Patapon 2; Patapon 3 is a must have game for your PSP. I would recommend you to get your own Patapon 3 copy. It is already available in online stores.