Last Saturday, Luis Manzano (Lucky) announced that Alodia Gosiengfiao won’t be showing up in LOL (Laugh Out Loud) due to Alodia’s “Stair Fight”. Alodia had an accident, fell down from their stairs, and got hurt.

Here are some Tweets from Alodia regarding her fall. 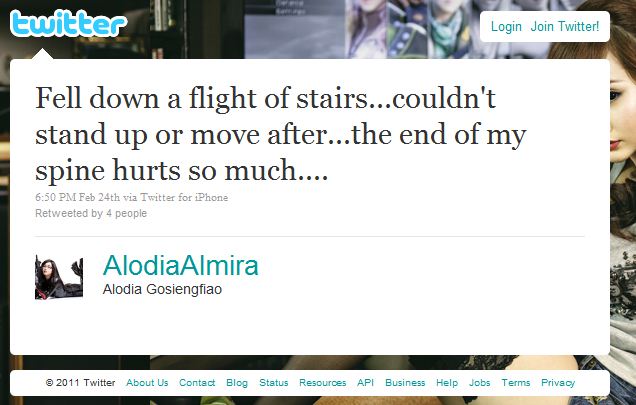 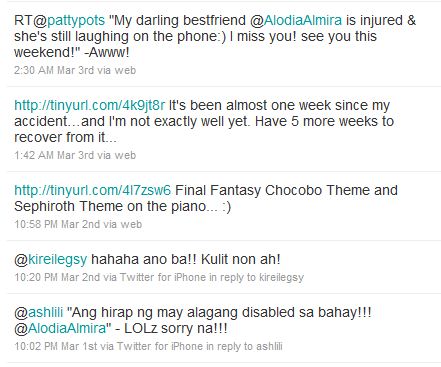 According to her Facebook Fan page she got a bone fracture and might take weeks for her injury to heal.

It seems that our cosplay queen Alodia got really hurt badly. I could not imagine how she fell from their stairs that resulted to such injury. But back at LOL, people their made a spoof of Alodia’s fall/accident. A really funny video that made Alodia laugh as she watches the video.

Alodia recorded Laugh Out Loud’s March 5, 2011 episode were Luis Manzano made the announcement that Alodia had an accident. Watch the video below. Warning! Funny Spoof re-enactment of Alodia in cosplay costume falling down from their stairs. ^_^

Check out also Alodia and Ashley playing Call of Duty Black Ops. What will you get when two girls play COD Black Ops and kills off zombies? Read more about it here: Ashley VS Alodia Gosiengfiao: The COD Black Ops Zombie Match