Last March 2, 2011, Apple has officially announced and released the most awaited gadget of the year, the Apple iPad 2. So what changed? Let’s take a look at the comparison, iPad vs iPad2.

So what’s new is the most anticipated gadget iPad 2? Basically iPad2 is faster and better as compared to it’s predecessor the iPad. iPad 2 is equip with a dual core processor making it faster, it has thinner design (33% thinner to be exact) and great new looks/ambiance, plus iPad2 has now a built in front and rear camera capable of capturing high resolution images.

The 1GHz dual-core Apple A5 custom-designed, high-performance and low-power system-on-a-chip makes possible for this gadget to load applications and play games faster.

Another great feature of iPad 2 is the Smart Cover. It’s a thin magnetic front cover which can be folded and act as a stand or support.

“The Smart Cover and iPad 2 were made for each other. Literally. Built-in magnets draw the Smart Cover to iPad for a perfect fit that not only protects, but also wakes up, stands up, and brightens up your iPad. That’s not just smart. It’s genius.”

iPad 2 has dual camera with FaceTime application that lets you capture and record high definition images/videos and share it with your friends. With iPad 2 you can now do video call conversation.

The features/specs that iPad and iPad2 has in common are: 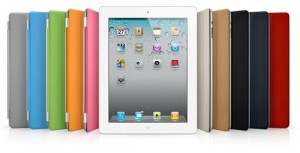 The prices indicated above will most probably be different or change, depending on your location, supplier or local store price.

Unfortunately iPad2 won’t be available here in the Philippines for the next few months. It will be first released in the US on March 11 and on the same month in other countries like Australia, Austria, Belgium, Canada, Czech Replublic, Denmark, Finland, France, Germany, Greece, Iceland, Italy, Ireland, Hungary, Japan, Luxembourg, Mexico, Norway, Poland, Portugal, Spain, Sweden, Switzerland and UK.