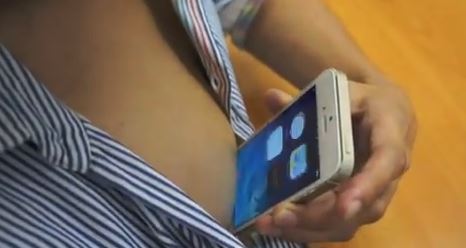 What do you think? Will you use your nipples to unlock your iPhone 5s? It’s funny, but it works. At the same time it’s not as practical as it can be very embarrassing.

I’ve seen other people unlocking their iPhone 5s using other methods. Some people use nose, toes, elbow, chin, and some even tried a cat’s paw to unlock the iPhone 5s. Surprisingly, the Touch ID recognizes them all.

What does this mean? This only means that the Touch ID is still not perfect. It’s supposed to read and unlock on finger prints alone. But it turns out that it can recognize any other pattern as well. As long as the subject has patterns on it, the iPhone 5s can register that pattern and it can recognize it.

Is this forward thinking? Do you think the Touch ID is really secure and safe? Or do you prefer the old number passcode instead?

For all those who have an iPhone 5s already, have you tried unlocking your phone using different parts of your body?