Naruto Shippuden Manga series is really getting hotter every chapter. The Great Shinobi World War is nearing or is already in its climax. At Like Naruto, an interview with Masashi Kishimoto a.k.a Kishi reveals that Tobi’s identity will be revealed very soon, withint the next few weeks from now. I’m guessing that it will be on Naruto Chapter 600. 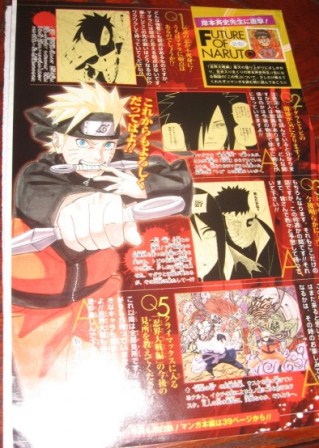 Further, Kishi revealed that Tobi and Madara knew each other, although he did not gave any details about the relationship of Tobi and Madara. Speaking of Madara, he is immortal now, but Kishi has something up his sleeves and doesn’t want to reveal it. He just said that we should just stay excited and wait to find out. Hmmm perhaps this is a job for Sasuke and Orochimaru. And Tobi is a job for Naruto, Kakashi, Guy and Bee.

Below is the full text of the interview:

Question: The legendary shinobi is now immortal! Does Uchiha Madara have any weak point?
Kishi: All strong people have some kind of weak point, but Madara does not. How will the fight from here on out go!? Please stay excited and wait to find out!!

Question: I’m curious about the connection between Madara and Tobi!
Kishi: I obviously can’t give too many details, but the two do know each other. What kind of relation they have will be gradually revealed in the current story!!

Question: Will Tobi’s identity be revealed soon…!?
Kishi: Indeed it will. In fact, it should be within the next few weeks!! Everyone, please wait and keep predicting until then!!

Question: How will Naruto and Sasuke’s story proceed now?
Kishi: I think that they will meet up once again during this war. Please look forward to seeing what will happen then!

Question: Now that we’ve entered the climax of the Great Shinobi World War arc, please tell us what some upcoming highlights will be!
Kishi: Everything from here on out will be a highlight!! Everything’s just going to get more and more exciting!! Everyone’s favorite characters will gather together to play a big part!! Please continue enjoying Naruto now that the Great Shinobi World War is in its climax!

I’m really excited in the next following chapters to come out. I’m very sure that Naruto fans would not want to miss the succeeding chapters from now on. Tobi’s identity will be revealed soon. Many months ago (or perhaps a year), many Naruto fans guessed that Tobi is Obito. And that theory died. But recently, and because of Naruto chapter 596, more and more fans believed that Tobi is really Obito. Still others have their own speculations as to who Tobi really is.

How about you, who do you think Tobi really is?