Word of Warcraft is expanding and getting your character into high level is difficult specially if you are maintaining multiple characters. Luckily Wrath of the Lich King expansion was released. Now there is more change to level up your characters and find new and exciting items.

There is a new type of item in the Wrath of the Lich King expansion which helps players level their alts quicker and easier than ever before. They are called Bind on Account items, or Heirlooms. In order to have access to get Heirlooms, you must already have at least one level 80 character, for the most part. These items should elicit a feeling of déjà vu  as they are nearly always named after items from Classic World of Warcraft. These items also have a distinct golden color to their text.

World Of Warcraft Guide: Getting to level 80 character is not that easy and is very time consuming specially to newbies. But it is possible to get into level 80 in 7 days so that you could take advantage of the Heirloom items.

There are 2 awesome benefits of getting and using Heirloom items:
1. The first benefit is they scale to your level. So, as you gain levels, the Heirloom item stats (armor, damage, etc) increase as well. This is really cool because it makes it unnecessary to upgrade most of your gear. Heirlooms have good stats, armor, and damage for your current level, so they keep you powerful and able to do quests quickly, which is a huge plus when trying to level up some alt characters.

2. The second, and probably most important, benefit is that some Heirlooms increase the experience points you gain from killing mobs and turning in quests by 10%. If you have 3 Heirloom pieces that give a 10% experience boost each, that’s a total of a 30% experience boost for your character while leveling to level 80. So, if it usually takes you 6 months total, real time, to level your alts, you could level that same character in about 4 months total. Just having Heirlooms could save you 2 months of your time!

Heirlooms have another unique quality that will allow you to use them for a long time to come;, they bind to an account instead of a single character. This allows you to send your Heirloom item to any other character who shares the same account and server as the character who purchased the item, even characters of the opposite faction.

Heirlooms provide several other unique benefits, including no durability, greatly cutting your repair bills, and several Heirloom pieces (shoulders, ring, and chest) grant the wearer an experience bonus. These bonuses stack with each other and with the rested bonus, though they do not stack with the Essence of Wintergrasp. 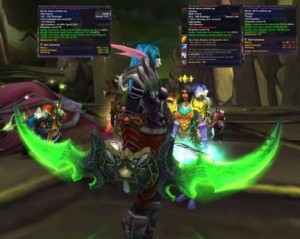 And now How to Get Your Own Heirlooms:
The most popular way of getting Heirlooms, hands down, is by doing dailies. Getting a full set of heirlooms can be done pretty quickly by doing dailies, if you know what you’re doing. The whole point of heirloom items is to save you time. So, not only do you want to save time after you get your Heirlooms, but you should also look into saving time while in the process of getting Heirloom items.

The way to do that is with an optimized route of all the dailies you need to do in order to get the items to trade in for Heirlooms. Obviously, you can figure out your own path for doing this, but if you’re like me, you’ll want a guide written by professional gamers for the sole purpose of getting dailies done quickly.

There is a certain guide which is very helpful all your dailies needs. It’s called Zygor’s Dailies & Events Guide. In their guide, they show you step-by-step how to get Heirloom items. It is a complete and detailed walk through that helps you speed runs for making gold with dailies, as well as getting your Crusader title, which is needed to buy Heirlooms if you want to be able to buy them by doing dailies alone. If you want to get Heirlooms, gold, and your Crusader title fast, I highly recommend picking up a copy of Zygor’s guide. Good luck!

You can get a copy of Zygor’s guide here.

Tags: heirloom guide, how to, world of warcraft, wrath of lich king