This is a bit late but great news for World of Warcraft lovers! World of Warcraft: Cataclysm was already officially released last December 7, 2010. A digital format of the expansion is already available to download (for sale of course) from WoW’s Cataclysm site.

Deathwing has spent that time healing himself, and plotting his fiery return from the elemental plane of Deepholm. His return tears through the dimensional barrier within Azeroth, causing a sweeping cataclysm that reshapes much of the world’s surface. In the midst of the world-wide disaster comes renewed conflict between the Alliance and the Horde, which is now under the rule of Garrosh Hellscream.

In the wake of the cataclysm, many changes have happened, both externally and internally. With the wake of the cataclysm, the Horde’s (former) leader, the orc shaman, Thrall, has stepped down from his duty as Warchief of the Horde, to better help the world of Azeroth as a whole, and has relinquished the duty to his advisor, the Mag’har orc warrior, Garrosh Hellscream, which itself has brought some of its own problems, within the Horde and without.

In the face of Garrosh’s aggression, the human king, and leader of the Alliance, King Varian Wrynn, has backed himself with his own strengths, storming the Southern Barrens after the cataclysm had struck, and sacking a village of Tauren, and making a base of operations in the northernmost foothills to cut off contact with the Southern Barrens’ neighbouring province, the Stonetalon Mountains. 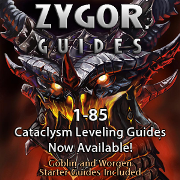 If you want to learn the fastest way to level up from 1-85, try the Zygor Guides 3. In Zygor Guides you will get the following:

You can try Zygor Guides 3 here.