BlackBerry is not giving up, despite the very tough competition that they are facing. The company is rumored to release another flagship smartphone, the BlackBerry A10 “Aristo”, featuring a 5-inch OLED display and powered by a dual core processor with quad core GPU. The BlackBerry A10 doesn’t seem to have a powerful specifications, but it will try to compete with the other 5-inch sized Android phones that are getting popular these days. Check out the BB A10’s spec below. 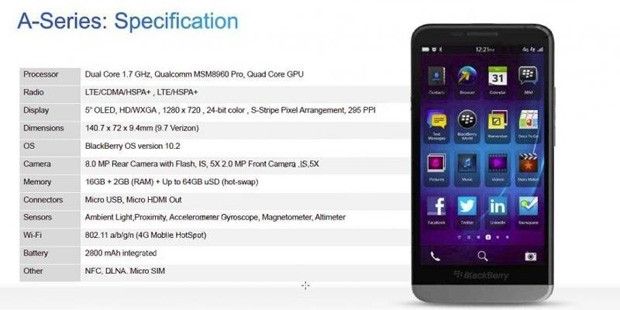 The BlackBerry A10 is said to be powered by a Dual Core Snapdragon S4 Pro processor clocked at 1.7GHz, with Quad Core graphics processor, and paired with 2GB of RAM. The A10 is definitely more powerful than the BB Z10, but not as powerful when compared to other 5-inch Android smartphones. And it is expected to run on BlackBerry OS 10.2

The BlackBerry A10 will feature an 8 megapixel rear facing camera with flash, image stabilizer, and is paired with a 2 megapixel front facing camera. It will have an internal storage size of 16GB and can be expanded up to 64GB via microSD, with hot swappable feature. I’m nor really sure what does this mean, but I think it will give you the ability to swap the internal storage for the external storage.

The BlackBerry A10 will also have a WiFi 802.11 a/b/g/n (4G Mobile HotSpot) connection, NFC, DLNA, Micro USB, Micro HDMI out and perhaps other connectivity options as well. The A10 will also have some sensors such as ambient light, proximity, accelerometer, gyroscope, altimeter, and magnetometer. And it will be powered by a 2800 mAh integrated battery.

Remember the specifications mentioned above are not yet confirmed. The actual specifications of the BlackBerry A10 might change when BB will officially announce the phone. In terms of specifications, the BB A10 does not have the best and cutting edge specifications. There are several android smartphones out there that features better specs compared to the A10. But I think the company wants to target the growing customer who are looking for a 5-inch (or higher) display size.

There’s no word yet on the BlackBerry A10’s release date or price. But it might be priced similarly to the Z10 at the time when it was first released in the market.

So, the BlackBerry decided not to use the last letter of the alphabet, “Z”, and this time they went for the first letter instead, “A”.