O+ Plus is pretty much new for most of us, unlike the already popular MyPhone, Cherry Mobile and Starmobile. But it looks like O Plus will also try to compete and join the race for Quad Core Android smartphones domination, locally. O Plus is expected to release the O+ 8.15, a 5-inch quad core powered Android Jelly Bean smartphone that is expected to compete head on with MyPhone A919i Duo and Cherry Mobile Skyfire 2.0. 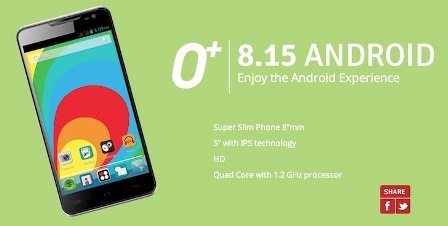 The O+ 8.15 will have a super slim body with only 8.4mm thick and will feature the Air Shuffle technology by O Plus. It will be powered by a Quad Core processor clocked at 1.2GHz paired with a 1GB RAM. It will also have an 8GB Internal Storage which is twice as large compared to the storage of A919i Duo, and a microSD slot compatible with up to 32GB.

The O Plus 8.15 will also feature a nice 5-inch HD IPS display, probably at 720p resolution. It will have an 8 megapixel rear facing camera with LED flash and BS, and a 2 megapixel front facing camera.

The O+ 8.15 will have basic connectivity functions such as WiFi, Bluetooth, GPS, WiFi Hotspot and more. It will be running on Android 4.1 Jelly Bean, and powered by a 2,000 mAh battery.

How about the price? The price is also one major thing to consider, specially for budget conscious Pinoys. The O+ 8.15 is expected to be priced at around Php 12,995. That’s much more expensive than the MyPhone A919i Duo and probably with Cherry Mobile Skyfire 2.0.

Is it O Plus’ turn to shine locally? Well let’s find out if it will impress the people and convince us to buy it. What do you think?