Naruto 614 is now available! and we have just witnessed the destructive power of the Juubi. It threw an attack way powerful than the Bijuudama. The Juubi targeted HQ and sadly all the people there vanished instantly, including their strategist Shikaku. But before they died, Shikaku had a plan on how they can stop the Juubi. What was his strategy and can it really stop the Juubi? Find out in Naruto chapter 614.

UPDATE: Naruto 614 is now available. Naruto chapter 614 is entitled “To You“. I’ll post my review and discussion about this chapter in a while. 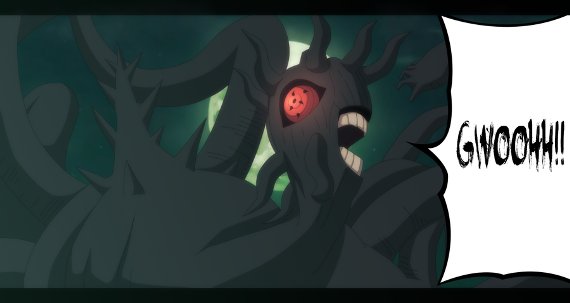 Last chapter was insane! The Juubi transformed into a grotesque creature with one eye, one ear on its right and a mouth on its left, and horns allover its head. The Juubi looks thin but it’s destructive power is at a different level. Even Madara was starting to have some troubles controlling it.

It started throwing long range projectile attacks that was way powerful than a Bijuudama. At first it looks random but it was targeting villages and lastly the alliance’s HQ. Madara intended to target the HQ to crush the “Mind” of the alliance. In this case Shikaku and the rest of the communication team.

But before they died, Shikaku was able to relay their last strategy or plan on how to stop the Juubi. What was it? I’m not really sure what was it. And I’m not sure either if their plan will be successful. Perhaps Shikaku was able to discover some weakness of the Juubi just by observing the situation and based on the information they got.

Perhaps they will try to severe Madara and Obito’s connection from the Juubi. But still, even if Madara and Obito was not controlling the Juubi, it is still dangerous and it must be destroyed at all cost.

If you have something to say about the previous chapter or the coming chapter, Naruto 614, please tell us what you think at the comment section below.