Samsung has unveiled today another Android smartphone in addition to their GALAXY lineup. This time, the cheapest android smartphone, most probably cheaper than Samsung Galaxy Y S5360. It is called Samsung Galaxy Pocket. The new budget phone is built with entry level specifications and is one of the most affordable smartphones. 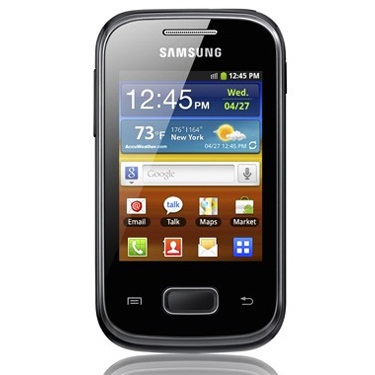 The Samsung Galaxy Pocket features a (tiny) 2.8-inch display with a pixel resolution of 240×320. It is powered by an 832MHz single core processor and runs on Android 2.3 Gingerbread. Even though this phone is small, it has a 3GB internal storage which is even larger than that of Samsung Galaxy Y S-5360. Of course, it also has an expandable memory of up to 32GB through microSD.

The size is quite small too, with a dimension of only 103.7mm x 57.5mm x 12mm it could fit perfectly in any pocket. That’s why it’s also called “Galaxy Pocket“.

Samsung Galaxy Pocket price is most probably around $100 or a little bit more. Since we are expecting it to be cheaper than the Galaxy Y. Galaxy Pocket will first be released in UK and then in other countries.