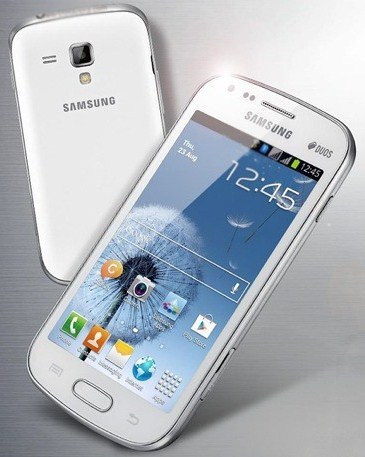 The Samsung Galaxy S Duos S7562 does not have the same design as the Galaxy S, but instead it looks similar to the, now popular, Galaxy S III. Of course with slight differences. It sports a 4-inch TFT capacitive touchscreen display at 480×800 pixel resolution. It runs on Android v4.0 Ice Cream Sandwich and will be powered by a Qualcomm MSM7227A Snapdragon processor based on Cortex-A5 CPU, clock at 1GHz and Adreno 200 for its GPU.

Since this is a mid-level smartphone, the specifications are not that impressive, not to flashy but not to low. The Galaxy S Duos sits somewhere in the middle and is expected to go clashing with HTC Desire V, also a dual SIM smartphone. Below are the rest of the specs of Galaxy S Duos.

The specifications above might change by the time the Galaxy S Duos is officially announced or released.

As of today, there is no information yet as to how much the Galaxy S Duos is going to be. But most probably it will be more or a little bit expensive than the Galaxy S, since the Duos version has added features.

The Release Date or official announcement was not also disclosed, but my guess is it would be by the end of Q3 or sometime in Q4. Or probably they might released it when Apple has released their much awaited iPhone 5.