Bleach 574 is the next exciting chapter in Bleach manga series. I haven’t written any Bleach manga topics lately, but this chapter is definitely I would not want to miss. Why? It’s time to see Kenpachi Zaraki in action. I’m not sure how strong Sternritter “V” is, but I liked what Zaraki told him “With your imagination you can’t create anything I can’t cut through… because I’m Kenpachi!” I don’t know what other tricks does Gremmy have, but I’m sure he is going to be no match for Zaraki. One other thing, will the name of Zaraki’s Zanpakuto be revealed in this chapter? Will we see its Shikai form, or even better… Zaraki’s bankai?! Let’s find out in Bleach chapter 574.

UPDATE: Bleach 574 was recently released. As expected, the battle between Gremmy ak.a. Sternritter V vs Kenpachi Zaraki continues. Zaraki saves Yachiru and tries to give a powerful blow against V. But V is holding back and it seems that Zaraki is in for a fight. Well that’s what he always wanted. Too bad we haven’t seen Zaraki’s new powers yet. Perhaps in the next chapter. 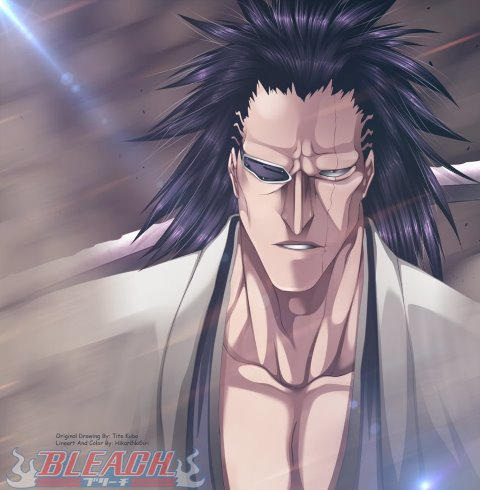 Bleach 574 is going to be an exciting chapter. Why? It’s not because Zaraki is going to face a really strong enemy. Remember, Gremmy Thoumeaux is Sternritter V. That’s far away from the first letter of the alphabet already, and near Z. Gremmy might have some unique mind technique, and he might have other tricks under his hood. But overall he is not that powerful. I’m sure Zaraki will cut anything that stands in his way, no matter how hard it can be.

During the fight of Zaraki with Sternritter V, we might see Zaraki unleash his Zanpakuto’s shikai form. Or if we are lucky, we might be able to see Zaraki’s bankai, finally! After all we did see Rukia’s Bakai during the previous chapter. So I wouldn’t be surprised any more, in fact I am expecting to see Zaraki’s new power.

I just hope that Bleach 574 would be the continuation of the previous chapter, and Tite wouldn’t troll us by changing the topic.

Bleach 574 spoilers will be out one day before the chapter is released. Just like it was before. Thanks to nvrwastetree for the tip.

I tried to research if there is any leaked information about Zaraki’s Zanpakuto’s name, its shikai or bankai, but there is no information yet. I guess it will be revealed to us in Bleach chapter 574. Or if not, it will be revealed very very soon. Bleach chapter 574 is expected to be released this coming Tuesday/Wednesday (depending on your region), fourth week of March.