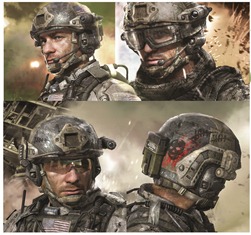 Based on the trailer above, Modern Warfare 3 sure packs a lot of action and new technology. It has also vast arrays of maps and battlefields to play with. Also, some rumors say that SEAL Team Six will be on Modern Warfare 3, the very team who killed Osama Bin Laden.

Expect a new MW3 multiplayer battle, Modern Warfare 3 Multiplayer is packed with 15 levels located around the world. Players will experience a new and exciting campaigns that is sure to surpass the previous Call of Duty game plays.

To give you a preview here is a little spoiler on where the game will start. Warning: SPOILER ALERT.

Modern Warfare 3 opens as Modern Warfare 2 closed: The United States under siege by Russian forces, ultranationalist Vladimir Makarov on the loose, Captain John “Soap” MacTavish and Captain John Price wounded and on the run with the Russian informant known as Nikolai.

Fleeing to a safehouse in Dharmasala, India, the three are attacked by Makarov’s men. In this firefight players take on the role of Yuri, a loyalist who works for Nikolai. Their safehouse compromised, the group flee the area in a helicopter.

The game then cuts to Manhattan where Russia is launching an attack on the city from a fleet of ships parked in the Hudson River. (It appears the famous U.S.S. Intrepid may be destroyed.) The U.S. calls in Delta Force to repel the attack. You take on the role of Frost, a Delta Force operative under the command of Sandman. Your goal is to take out a jamming tower on top of the New York Stock Exchange to open the area for a U.S. counterattack.

Read the whole story at Kotaku.

COD: Modern Warfare 3 is develop by Infinity Ward and Sledgehammer Games and is expected to hit on November 8, 2011. MW3 will be available in PC-DVD, X-Box 360 and PS3 formats. Sledgehammer is said to be aiming for a “bug free” in the first release of MW3 and is aiming for a Metacritic review score of aove 95%.

Don’t get left behind in the battle. You can Pre-order Call of Duty MW3 below.