Fairy Tail 312 will be an epic chapter. We will see three sexy magicians fight; Erza vs Kagura vs Minerva. The title is also interesting too – “3 sums” (for some reason I could not spell out the real title since it has a double meaning), does it ring a bell? Lolz! This is a chapter you definitely do not want to miss Fairy Tail fans! Who will win; Erza, Kagura or Minerva? Find out in Fairy Tail chapter 312.

UPDATE 2 : Fairy Tail 312 is now available! This chapter is entitled Threesomes. First pages are in colored! Who will win the battle? Find out in chapter 312.

UPDATE: I know this sounds disappointing, specially that you guys are eager to see Erza’s fight, I think FT is on a week break. I checked some forums and they got info that it is one a one week break. I’m not sure if it’s because Mashima needs some rest or it’s probably because the gap between the anime and manga is closing in. I’ll update this ASAP once the chapter is released.
UPDATE: Fairy Tail 312 release date is not yet clear. The chapter is delayed already by 1 day as of this time. Let’s just wait. 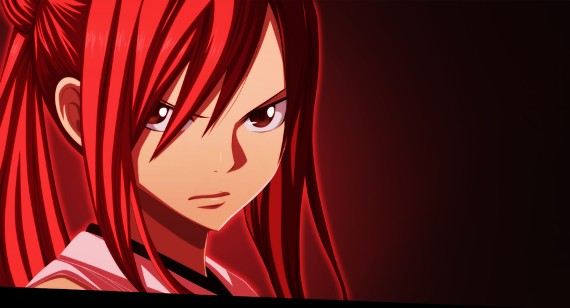 Things are really getting hot in the Daimato Enbu game. Mavis Vermillion predicted that Erza would encounter Minerva in a certain place in the battle field. But to their surprise, Kagura shows up and challenged Erza instead. Mavis face was really funny looking. Specially when she thought she lost her ability to predict. She was so proud of her ability and suddenly it did not happen. She’s just a child after all.

Erza vs Kagura alone would be a great fight. Two sexy female sword magicians fighting is already a must see battle. But Mavis’ prediction was correct after all. Minerva shows up in the middle of Erza and Kagura’s battle, interrupting their fight.

Now, it’s a “3 sums” fight. Minerva had different set of skills compared to Erza and Kagura. Plus she’s a bit unfair and would do anything just to win and crush Fairy Tail.

Kagura is not bad either. I don’t dislike Kagura, and I wish Erza and Kagura would team up to crush and beat Minerva to pulp. I’m still confident that Erza would win this 1 vs 1 vs 1 battle and over all Fairy Tail could win the game.
Can’t wait for Fairy Tail 312 to be released already! Who do you think would win guys? Who’s your bet?