How to Run Android Apps on PC for Windows and Mac

When I tried Samsung Galaxy Y, it was fun at first. But later I found out that I can only install limited apps. And most of the better Android games are not compatible with Galaxy Y, like the newly released Bad Piggies. So I asked “Can I run Android Apps on my PC?“. Perhaps you are also looking for a way on how you can run android apps on PC, right? Before there was a way for you to play Android games on PC but it’s not very stable, full of bugs and it was primarily used to test mobile OS like ICS or Jelly Bean. Also, not all Android games or apps can be installed or run successfully. But now, there is a new FREE software for Windows PC (and also available for Mac) the lets you run android apps on PC. The software is called BlueStacks App Player. 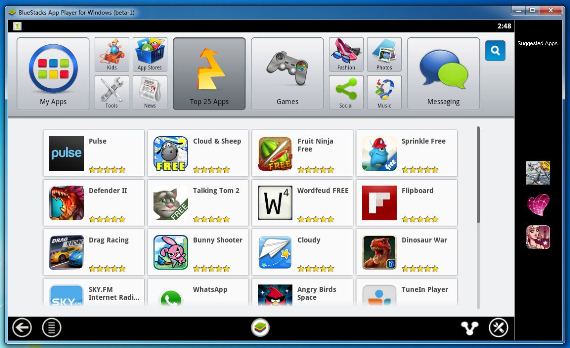 With BlueStacks App Player, you can play or run different Android Apps and games on your PC, whether you are using a Windows platform or Mac. It’s like an Android Apps emulator for PC. Not only can you run and play different apps that are available on Google Play, you can also sync the apps that you have installed in your smartphone to your PC so that you can easily switch from Smartphone to PC and vice versa anytime you need it.

How to Run Android Apps on PC

To run android Apps on PC do that steps below.

1. Download BlueStacks App Player here
2. Install the software and just wait.
3. Once you are done downloading the software, just install it and your ready to go. The App player for Windows should look like the image above.

How to Sync BlueStacks App Player with Your Smartphone

BlueStacks App Player is compatible with Windows 7, Windows 8 and Mac iOS X. I’m not sure thought if it will run on Windows XP. I read from a comment on YouTube that a user was not able to run BlueStack on his Windows XP. But then again, if you are still using Windows XP better try it your self.

BlueStacks App Player can run Android Apps on PC even without a graphics card or video card. But I think having a graphics card install can improve the performance or graphic quality specially when you are running games.

As of to-date BlueStacks App Player is still in BETA version, meaning it is expected that you may encounter some bugs along the way. Even so, it’s still the easiest and stable way to run Android apps on PC. Have you download it already? What do you think?