The Western Digital (WD) VelociRaptor 1TB is the latest and one of the fastest hard drive to-date. When Western Digital first introduced the Raptor (later became VelociRaptor), it was a hit specially with the PC Enthusiast community. WD proved that their Raptors (Velociraptors) where significantly faster compared to regular hard drives, even in RAID 0 configurations. Unfortunately, its popularity declined when Solid State Drives (SSD) became popular and cheaper. Until now SSDs proves to be significantly faster and more efficient than the typical hard drives or even when compared to the VelociRaptor. But SSDs lacks the storage capacity that most of the users are looking for. SSDs cost per GB is high, and that’s where WD’s new VelociRaptor 1TB comes in. Users needs more storage at the same time fast enough to access their data. 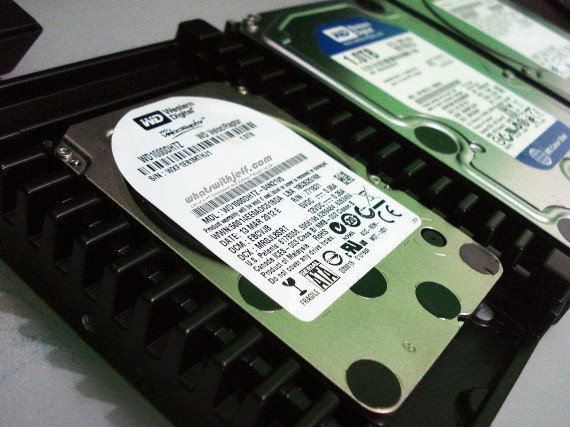 The Velociraptor 1TB features 10,000 RPM Rotational Speed, buffer size of 64MB and transfer rate of 200MB/s. It’s made up of 3x 333GB platters (for the 1TB model). It’s basically a 2.5-inch drive mounted on a 3.5-inch drive bay referred to as the “Ice Pack” that serves as its heatsink. The Ice Pack also gives the VelociRaptor its unique strong look that is distinct from any other hard drives. I do not have a picture here where the 2.5-inch is separated from it’s Ice Pack but it can be removed. Unlike the previous model of the Velociraptor VR200M that comes in 600GB and 450GB capacity, the new VelociRaptor VR333M comes in 250GB, 500GB and 1000GB sizes. 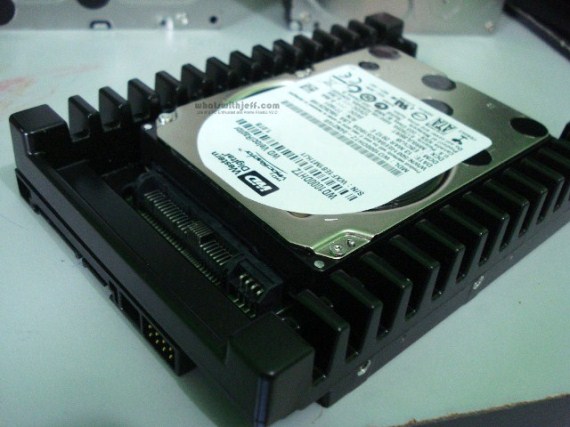 I used three different tools for testing the VelociRaptor 1TB; HD Tune Pro, ATTO Disk Benchmark and CrystalDiskMark. I currently do not have a Solid State Drive to compare it with, so I used my 1TB Western Digital Caviar Blue and a Hitachi Desktar 1TB HDS721010CLA332 to compare it with. 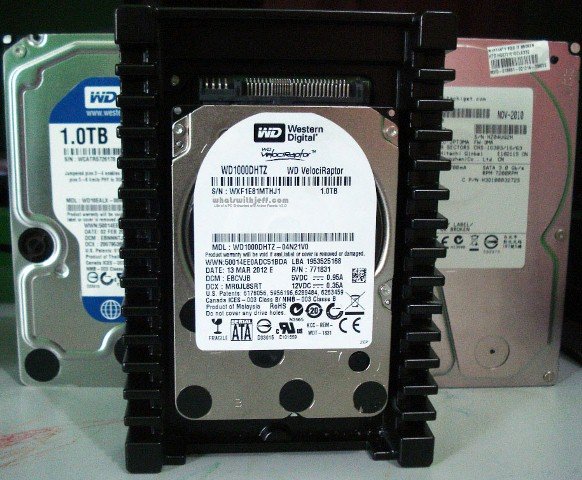 HD Tune Pro
For the first test and benchmark, I used the HD Tune Pro (read only). Below are screen shots of the test results. I have made two test for the VelociRaptor, one is 100% free capacity and the other one have 96% of its total capacity consumed.

As you can see in the screenshots above, the VelociRaptor has a higher average read speeds compared to the WD Blue 1TB and Hitachi Deskstar 1TB. Also the performance of the VelociRaptor dropped when 96% of its space were occupied. I’m pretty sure the results for the WD Blue and Hitachi would have been slightly better if they had 100% free capacity.

The results still shows that the VelociRaptor 1TB performs better compared to the two hard drives. And it also shows a decline in its performance when the drive has only 4% left of its total capacity.

CrystalDiskMark
And last but the not least, below are screenshots of from the CrystalDiskMark test results, that also shows similar results with the HD Tune Pro and ATTO Disk Benchmark.

With the new VelociRaptor 1TB, Western Digital could regain its thrown and proved that they have one of the fastest hard drives on the planet. I was hoping I could get other hard drives that are direct competitors like the new Toshiba AL13SE which is also a 10,000 RPM-Class Enterprise HDD or its predecessor the VelociRaptor 600GB, and other high performing drives such as the Seagate Barracuda XT and Hitachi Deskstar 7K3000.

The VelociRaptor 1TB is great for users who are looking for fast and high performance hard drive, but with larger capacity at a lower cost. I can imagine how fast the VelociRaptor 1TB could go if it were put into a RAID 0 configuration. But there is one problem that the VelociRaptor still is facing until now, and that’s the Solid State Drives. SSDs, like the popular Crucial m4 or Samsung SSD, still proves to be the fastest drives and I would recommend them to be used as your primary drive (or where your operating system is installed). Prices of SSDs are fast falling, see the lowest Solid State Drives prices here.

But if you think SSDs are too expensive and pricy enough for you, then you can go for the VelociRaptor. It is still the better option, specially if you are just planning to have one fast hard drive, with large storage capacity, installed into your computer. Or if you already have an SSD in your system, you can always use it as a secondary drive. Playing large-sized files like HD movies or playing games and other heavy applications, it’s a lot faster with VelociRaptor.

I would recommend this to PC enthusiasts, users who are into photo and video rendering/editing and workstation servers. I’m not sure though if the VelociRaptor are perfect for NAS or SAN setups, but if you are trying to build a NAS or SAN, I would recommend you to check out the new WD Red Hard Drives first.