Fairy Tail 291 is up next and things are speeding up. The fated day is almost near. What kind of unseen feature awaits Natsu and the Fairy Tail Guild? Fairy Tail 291 spoiler is not yet available. It’s usually 1 day before Fairy Tail chapter 291 is released. Meanwhile… 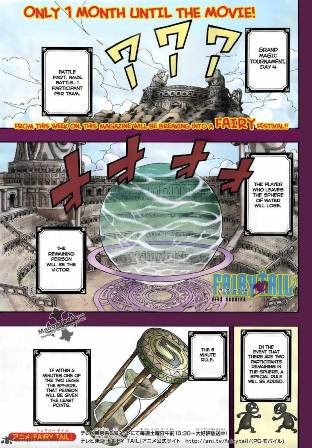 In another place, Laxus and Makarov was talking. Laxus was going to ask Makarov what is really this Lumen Histoire, Fairy Tail’s darkness. Mavis suddenly appeared and joined the conversation. According to Mavis, Lumen Histoire is not the guild’s darkness, but it’s actually Fairy Tail’s light. Unfortunately Mavis was not able to tell Laxus what Lumen Histoire is, in this chapter, because she started to act strange and cried! Such a kid…

Back at were the Fairy Tail is, the whole guild was having fan and as usual causing a lot of ruckus. On the other hand at Sabertooth’s lodging, Sting was wondering if he will fight Natsu next.

During the last page of the chapter, we saw Yukino Aguria reporting to the sergeant. Who is this Yukino? Is she good or bad? Its July 3 on Fairy Tail’s calendar and there are only 4 days left until July 7. That’s another 7-7-7! This fated day could somehow be connected to why the dragons went missing years ago.

Anyway, I’m anxiously waiting for Fairy Tail 291 to be released. The next chapter is entitled Naval Battle. I’ll post update once Fairy Tail spoiler comes out, or Fairy Tail chapter 291 itself comes out.

Check out Fairy Tail Movie: Priestess of the Phoenix