Bleach 525 is the next episode of Bleach manga series. Last chapter we saw two blood thirsty shinigamis fighting each other. One trying to teach the other one, while the other trying to keep alive. Will Unohana die? Will Zaraki learn the art of fighting? And what is Unohana’s sin? Find out in Bleach chapter 525.

UPDATE: Check out my Bleach 525 Review
UPDATE: Bleach 525 is now available! This chapter is entitled “Edges”. Unohana will be pushing Zaraki to his edge to bring back his hidden powers. After all, Zaraki is more powerful than Unohana. 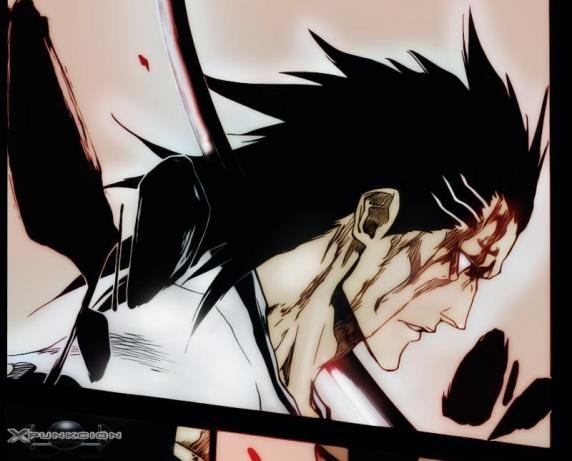 The fight between Unohana and Zaraki is epic! But it seems that Zaraki likes to be cut more than cutting his opponent. ^_^ Anyway, his opponent (a.k.a his trainer) is a Kenpachi and one of the strongest Shinigami. So it’s expected that this will be a difficult battle for Zaraki.

There are things that bugs me about this fight:
1. Will Unohana Die?
Well honestly I’m not really sure. According to the new Captain Commander Kyouraku, somebody has to die. And there is always the possibility that Unohana might die after this battle. But I’m still hoping that she won’t have to. Hey, Byakuya, who we all thought is going to die, didn’t die at all.

2. Is Kenpachi is Saiyan?
Well, remember the scene where Unohana stab Zaraki’s throat? I’m not sure if that happened or not, but according to Unohana, Zaraki has to experience near death to become more powerful. Sounds like a Saiyan.

4. What is Unohana’s Sin?
Unohana mentioned that it has something to do with Zaraki, her sin. What could it be? My guess is Unohana may have done something with Zaraki’s body that’s why he needs to experience near death to become stronger.

But my other theory, a close to reality theory, is that Unohana might have encountered Zaraki before, when he was still not a vicious killer, or on a later date. She might be the reason why Zaraki is a monster right now. Or she might be the one who left the scar on Zaraki’s eye (I’m not really sure with this one).

Anyway, what do you think guys?

I’ll post update asap, once spoilers are available or when Bleach chapter 525 is available. Stay tuned!

By the way, please do support Bleach manga by buying the original volumes once they become available in your region.