LG Optimus G E973 vs Samsung Galaxy S III I9300: Which Android  phone would you choose? 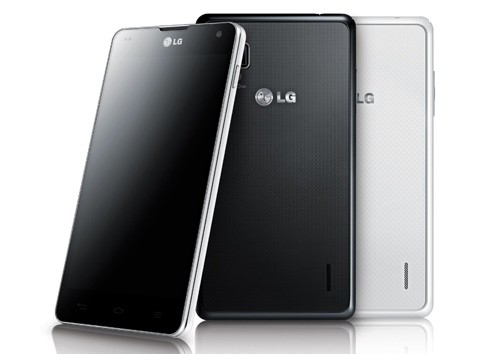 It’s built with a large 4.7-inch True HD-IPS+LCD display paired with the G2 Touch Hybrid Display. With the new technology, the LG Optimus G consumes lesser power compared to a Super AMOLED display. LG plans to release it on the market initially running on Ice Cream Sandwich, but a Jelly Bean update will surely follow. The rest of the specs can be seen at the table below.

Now let us put the two high-end android phones side by side and compare their specifications.

As you can see in the table above, the LG Optimus G has some advantage over the Samsung Galaxy S3. First, it has a slightly powerful CPU (benchmarks below), bigger and better display, much larger memory size and a Jelly Bean update is expected to follow soon. Although Samsung will most probably provide a Jelly Bean update on the Galaxy S3 too.

Why did I say that the LG Optimus G display is better than the Samsung Galaxy S3? Although it’s smaller by a mere .1-inch, the pixel per inch density ratio is much higher compared to the SGS3’s ppi (318 vs 306). LG also claims that the new display technology consumes as much as 70% less power compared to a Super AMOLED display. And I’m not really a Super AMOLED fan, since the color tends to become over-vivid and can sometime be extraneous to the eyes.

Now, how does the CPU of the LG Optimus G par with Samsung Galaxy S III’s processor? VR-Zone has posted some benchmarks done by Tweakers.Net comparing the high end mobile processors currently found in the market. Please refer to the tables below: 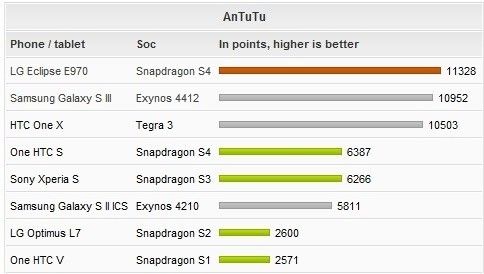 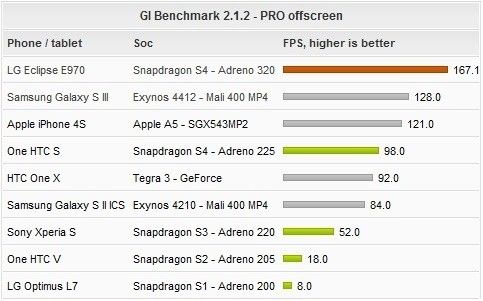 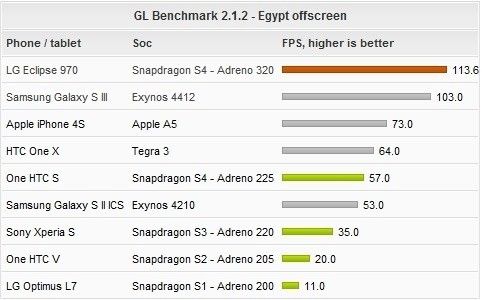 Since the new Optimus G is built with an impressive and powerful CPU+GPU, let’s just hope that it doesn’t have overheating issues like the HTC One X users are complaining about.

Based on the specifications alone, I’d go for the LG Optimus G E973. It’ has a (slightly) better specs compared to its competitor. Of course there are other factors that still need to be considered before we can really decide who the winner smartphone here is.

We haven’t compared LG Optimus G’s price since it’s still undisclosed as of to date. We also need to look at the camera (photo and video) quality. It’s doesn’t mean that the 13MP camera is better than the 8MP camera, until we see the actual images and videos.

We also need to look at the apps and other features that the LG Optimus G offers. If all this things will somehow be generally better than Samsung Galaxy S3, LG might have a chance to grab the consumers’ attention and beat its competitors.